NRL ROUND 18 TIPPING PREVIEW
By W D Nicolson
Follow @NRLTweet
Well Origin 3 has been run and won by - you guessed it - Queensland.

NOT The Footy Show has your Origin 3 Recap Podcast here and our Round 18 Preview is in the same 70 minute Podcast - grab it here.

Sorry - no full Preview this week on the site - the Podcast has plenty of insight but the Late Mail and Picks are below.

Full Round 18 Tips are Bulldogs by 4, Storm by 16, Warriors by 10, Rabbitohs by 12, Sea Eagles by 20 and the Roosters by 2 (will likely tip Sharks if Paul Gallen plays however).

My 'Locks' are Storm, Sea Eagles and Rabbitohs. My 'Less than Confidents' are Warriors and Bulldogs, while My 'Don't put the house on Its' are the Roosters if Paul Gallen doesn't play.

All the panel's picks are below with their Special Fried Rice selections. I have updated the NRL Injured List with all of this week's Late Mail as well as below in streamlined form.

Round 18 Late Mail... If you have any reputable mail - Let me know via @NRLTweet
Tigers v Bulldogs
Robbie Farah misses after getting KO'd in Origin 3, Masada Iosefa will start with Tom Humble likely to get a run on the bench. Joel Reddy will be 18th man and Gareth Ellis likely won't be back til next week. There are also rumblings that Matt Utai could miss, meaning Reddy would come onto the wing. The Dogs expect Josh Morris to backup from Origin 3 with Dale Finucane or Josh Jackson to miss out on a spot on the bench if Greg Eastwood is fit to play.
Storm v Raiders
Cameron Smith is set to start off the bench if Craig Bellamy is consistent from past Origin follow-up games, while Cooper Cronk (may not actually play, rumour around that he might be rested so beware!) and Dane Nielsen will start. Ryan Hinchcliffe would then start at hooker and that means Rory Kostjasyn could make the bench at the expense of props Siosaia Vave and Jaiman Lowe. Canberra have David Shillington backing up, Joel Thompson will play despite a hand injury and Matt McIlwrick could still be a late withdrawal for the return of Shaun Berrigan. Mark Nicholls or Sam Mataora will be the final reserve.
Titans v Warriors
Greg Bird will miss and possibly a month or more with a pec injury, and Nate Myles is OUT with a sore head. Expect Matthew White to start and Luke Douglas to go to the backrow - unless Luke Bailey decides to wait another week before returning (Bailey will not play). If so then Luke O'Dwyer would start and Ryan James and Michael Henderson would come into the mix for the bench. Steve Michaels or Phil Graham are the logical replacements if David Mead withdraws due to the death of his father mid-week or any of the other three-quarters succumb to injury (William Zillman, Jamal Idris or Beau Champion). Pita Godinet is the 18th man for the Warriors, with Manu Vatuvei not likely to be brought back until Round 19 despite running at training before the team flew to the Gold Coast.
Rabbitohs v Knights
Greg Inglis will backup with his elbow injury actually improving lately despite his workload. Sam Burgess is fine after his first run in a while last week, with Shaune Corrigan and George Burgess to miss out. Darius Boyd backs up and Kyle O'Donnell will probably miss out so Chris Adams is available to spell Danny Buderus at some stage in the game.
Sea Eagles v Eels
Tony Williams and Anthony Watmough weren't 100% during Origin 3 but they should join Brett Stewart in backing up. Vic Mauro and Dean Whare (on standby for David Williams) probably miss out, while Daniel Harrison might beat out Joe Galuvao or Darcy Lussick for a spot on the bench even if Glenn Stewart (knee) isn't fit to play. The Eels won't have Jarryd Hayne (out a week if not three with an ankle sprain), so Willie Tonga gets a reprieve in the centres and Luke Burt is the fullback.
Sharks v Roosters
Todd Carney will play but Paul Gallen remains 50/50 with a dodgy knee. The MNF game helps his chance of playing but with Jayson Bukuya (ankle) in doubt and Jeremy Smith (suspension) out - the Sharks look vulnerable. Andrew Fifita hopes to make a return from appendicitis, as does Anthony Tupou who has been out for most of the season. Shaun Kenny-Dowall is back for the Roosters and the Roosters need him, Mitchell Pearce will backup.

NRL ROUND 18 PREVIEW - 2012
05/07 Odds are courtesy of Sportingbet Australia
For some more insight into the markets check out NOT The Footy Show's new resident tipster's site GT Tips http://www.gttips.co.uk
All Kick-Offs are LOCAL time.

NOT The Footy Show TV is taking a short hiatus - we will be back towards the end of the season for the run home. 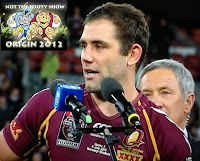 Okay Queensland we get it, you're good. Just stop rubbing it in.

Get NOT The Footy Show Episode 114 as a rather relieved QLDer Matthew Duncan joins vanquished NSW hosts Warrick Nicolson and Dave Chapman as they try to muster the strength to recap QLD's 21-20 win over NSW in Origin 3 to win SEVEN SERIES IN A ROW!

Maria Tsialis also stops by to open the show and offers reasons for NSW fans to go on and George Taylor delivers his best bets on Round 18.

Plus a full odds preview of Round 18 with all our picks and Special Fried Rice selections.

NOT The Footy Show congratulates Queensland on winning... again. But we don't have to like it!

NOT The Footy Show Episode 114
Origin 3 Recap and Round 18 NRL Preview - Released Wednesday July 5, 2012
Right Click Save Target As This Link if you don't have iTunes for the MP3 File.
Subscribe to the Podcast via this link / Download mp3 version

LIKE the show on Facebook for all the latest updates.
NOT The Footy Show will release another Podcast next Wednesday night - July 11 with our Round 19 Preview show.

LW: 5/5 | SEASON 60/122
Eyes does not eat Special Fried Rice... yet.
Make sure you enter NOT The Footy Show's Tipping Competition, the outright winner walks away with an Official Steeden Match ball!