NRL ROUND 15 TIPPING PREVIEW
By W D Nicolson
Follow @NRLTweet
Okay first the good news - NSW won State of Origin Game 2 16-12 over QLD and the NOT The Footy Show Team has recapped the glorious evening in mid-June and previewed all of Round 15.

The bad news is - due to massive time constraints this week - www.wdnicolson.com cannot deliver a big beautiful preview in written form.

So if you want the reason we we've tipped who we have - please listen to the Podcast and get yourself a dose of GT's Tips and some other prognostications from the NOT The Footy Show tipping panel.

As for my tipping - it's going ok (in fact a little better than that but let's not tempt fate) - and after writing that you'll see that my picks are slightly more adventurous than normal.

For a start I still can't bring myself to tip the Titans.

All the panel's picks are below with their Special Fried Rice selections. I have updated the NRL Injured List with all of this week's Late Mail. With Corey Parker and Billy Slater are out and Paul Gallen is in severe doubt out of Origin 2.

Round 15 Late Mail...
Cowboys v Broncos
Brent Tate probably misses for Cowboys, with Kalifa Fai-Fai Loa in line to play, while Brendon Gibb replaces Corey Parker in the Brisbane lineup and Justin Hodges and Petero Civoniceva won't play. Sam Thaiday is a real rough chance to play.
Dragons v Bulldogs
The Bulldogs will choose between Martin Taupau and Dale Finucane for their final bench spot, while the Dragons will make a final decision on their bench later today but don't expect any real surprises.
Sharks v Warriors
Paul Gallen remains a long shot with Cronulla toying with playing Chad Townsend off the bench as his replacement, and the Warriors will be 1-17.
Eels v Rabbitohs
Greg Inglis and Dave Taylor will backup, while Chris McQueen could move to the bench and Dave Tyrrell or Jason Clark start. The Eels will be 1-17.
Titans v Panthers
Penrith lose Travis Burns to a busted face, so Arana Taumata and Harry Siejka come into calculations to replace him and not Blake Austin. The Origin trio - Grant, Jennings and Lewis will play. The Titans could lose any of their three Origin stars with Greg Bird, Nate Myles and Ashley Harrison carrying knocks. Also Scott Prince is no certainty after back spasms last weekend.
Tigers v Roosters
The Tigers get Robbie Farah back and Blake Ayshford or Tim Moltzen will play five-eighth with Beau Ryan expected to play fullback. The Roosters look healthy with Mitchell Pearce backing up.
Sea Eagles v Storm
Finally, the Storm will move Matt Duffie or Justin O'Neill to fullback for the injured Slater and Maurice Blair would come into the centres. Cam Smith and Cooper Cronk will backup, while Glenn and Brett Stewart will definitely play and Anthony Watmough is likely.

NRL ROUND 15 PREVIEW - 2012
15/06 Odds are courtesy of Sportingbet Australia
For some more insight into the markets check out NOT The Footy Show's new resident tipster's site GT Tips http://www.gttips.co.uk
All Kick-Offs are LOCAL time.

LW: 2/5 | SEASON 49/103
Eyes does not eat Special Fried Rice... yet.
Make sure you enter NOT The Footy Show's Tipping Competition, the outright winner walks away with an Official Steeden Match ball!

NOT The Footy Show Video is taking a short hiatus - we will be back just not every week. 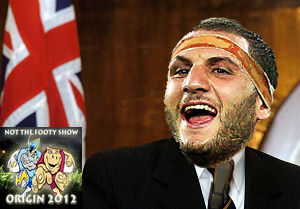 Farah for PM! We told you NSW needed some class to beat QLD.


And beat them they did.

Get NOT The Footy Show Episode 111 with a full run down of Origin 2 with guests Maria Tsialis, Matthew Duncan and Nic McInerney joining hosts DC Chapman and Warrick Nicolson. Plus George Taylor and the boys preview all the odds for Round 15 of the NRL.

Also in Episode 111 we break down the best of NSW 16 QLD 12, the big plays, discuss changes for Origin 3 and ask our resident Maroon if Queensland are really beatable with Billy Slater out of the series?

NOT The Footy Show is not quite as inspiring as Phil Gould's pre-Origin speeches but we've got his from Game 2 to open the show at least.
NOT The Footy Show will release another Podcast next Wednesday night - June 20 with our Round 16 Preview Show.