NRL ROUND 14 TIPPING PREVIEW
By W D Nicolson
Follow @NRLTweet
With State of Origin Game 2 on our doorstep - and half the NRL season done and dusted - it's probably worth recapping how successful www.wdnicolson.com has been with our NRL preview so far in 2012.

Honestly, we've tipped better - namely in 2010 when we took out a couple of online comps and a Weber BBQ!

We don't include Origin games and don't award bonus points for perfect rounds but sadly the latter hasn't applied in 2012.

That being said - this preview is all about giving you all the information relevant to YOU picking a winner, we just try and give you some guidance and if we make sense most of the time - stick with us.

Just 5 games on the schedule this week with Origin 2 next Wednesday. And why the heck isn't there a dedicated Queen's Birthday Long Weekend Monday DAY game? NRL you've missed a trick in a major way by not scheduling a 2pm kick-off and the clubs have swung and missed by not lining up to play a game every year against the same opponent.

For more on how we see the Weekend unfolding, check out the Podcast and Preview below.

For game-specific Late Mail every week - check back on Friday (or if there's an earlier game, earlier) for all your tipping and fantasy game needs.

NOT The Footy Show Episode 110
Origin 2 and Round 14 NRL Preview - Released Wednesday June 6, 2012
Right Click Save Target As This Link if you don't have iTunes for the MP3 File.

NOT The Footy Show will release another Podcast next Thursday night - June 14 with our State of Origin Game 2 Recap and Round 15 Preview Show.

NRL ROUND 14 PREVIEW - 2012
07/06 Odds are courtesy of Sportingbet Australia
For some more insight into the markets check out NOT The Footy Show's new resident tipster's site GT Tips http://www.gttips.co.uk
All Kick-Offs are LOCAL time.


NRL TWEET PLAYER OF THE YEAR AWARD VOTERS
W Nicolson and C Buchanan. Follow #NRLTweetPOTY for every Vote in 2012.
COMING IN

WTG: T Moltzen, M Utai, B Ryan, C Lawrence, L Tuqiri, C Sironen, B Marshall (c), A Woods, T Humble, K Galloway, A Blair, L Fulton, C Heighington.
Bench: M Iosefa, B Ayshford, M Bell, B Murdoch-Masila, J Reddy.
[Team Changes - The Tigers take so long to name pretty much the same lineup as last week, there's no point going through what changes did happen - bar Farah to Origin. ]
THURSDAY GAME PREVIEW
Listen to the Podcast for a full preview, but we like the Tigers because they've got Marshall and the Storm don't have Cronk, Slater or Smith. And the Tigers are only missing Farah from the team that has won half a dozen in a row. Storm will fight but the Tigers should win.
TIPPING AND FANTASY LATE MAIL
SMH and Other Late Mail - The Storm lost Will Chambers indefinitely with a health condition, so Sisa Waqa or Anthony Quinn will start on the wing and Justin O'Neill goes to the centres. Michael Greenfield could miss to allow either Mitch Garbutt or Kenny Bromwich to debut or make room for an experienced forward to return from injury. The Tigers will leave Joel Reddy out if Blake Ayshford is over a wrist injury.

THE NRL TWEET'S PICK
Tigers by 10.

NOT The Footy Show Video is taking a short hiatus - we will be back just not every week. 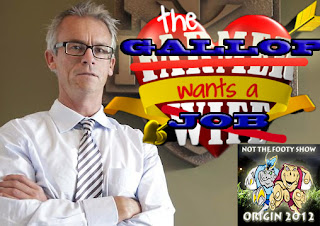 The Gallop wants a job? NOT The Footy Show asks the question: What could David Gallop do next?

Get NOT The Footy Show Episode 110 and 'enjoy' Warrick Nicolson, Matthew Duncan, DC Chapman and YES Nic McInerney (we found him!) talking Gallop's legacy and future, Preview Origin 2 and tip Round 14 of the NRL.

Also in Episode 110 we hear an exclusive, breaking, developing, we're hearing, official announcement over the future of an NRL coach... Eyes has the mail you don't want to miss.

We also ask why doesn't the NRL play a regular fixture during the day on the Queen's Birthday Long Weekend Monday and why aren't clubs lining up to play on the day?

NOT The Footy Show is getting so popular we hear the Queen wants us at her next diamond jubilee celebrations.


NRL TWEET PLAYER OF THE YEAR AWARD VOTERS
W Nicolson and G Delaney. Follow #NRLTweetPOTY for every Vote in 2012.
COMING IN

Knights are 4-8 and 13th, Raiders are 4-8 and 15th.
HEAD TO HEAD LAST 10
Knights 6 Raiders 4
Newcastle won both games last year but the teams have split the past 6 games.
TUESDAY TEAM NEWS

CAN: R Robinson, D Pelo, J Croker, B Ferguson, E Lee, J Dugan, J McCrone, D Tilse, T Waddell, T Learoyd-Lahrs, J Papalii, J Thompson, S Fensom.
Bench: M McIlwrick, B Harrison, S Mataora, J Picker, T Thurling, M Nicholls, S Williams.
[Team Changes - David Shillington is playing Origin (lucky guy) and Dane Tilse replaces him as the starting prop in the only change to the starting 13 for the Raiders. Bronson Harrison and Matthew McIlwrick are added to the bench, while Trevor Thurling, Mark Nicholls and Sam Williams will travel with the team as extra men on the bench. As of yet, there are no changes to the coaching staff. ]
THURSDAY GAME PREVIEW
Listen to the Podcast for a full preview, but we like the Knights in the battle of the busted teams. While the Knights will improve under Wayne Bennett (eventually), the Raiders have rotted under the direction of David Furner and he won't be there much longer... win or lose.
TIPPING AND FANTASY LATE MAIL
SMH and Other Late Mail - Junior Sa'u likely misses out but Matt Hilder could be a late inclusion for Chris Adams on the bench. Sam Williams could play if Furner decides to play Josh McCrone at hooker and leave Matt McIlwrick out of the team. Trevor Thurling is the man most likely to force his way onto the bench from the extended group if Shaun Fensom's head or knee keep him out of the contest.

THE NRL TWEET'S PICK
Knights by 6.


NRL TWEET PLAYER OF THE YEAR AWARD VOTERS
M Vickers and M Tsialis. Follow #NRLTweetPOTY for every Vote in 2012.
COMING IN

GLD: W Zillman, K Gordon, J Idris, B Champion, D Mead, A Sezer, S Prince (c), B Lawrence, M Srama, M White, L Douglas, M Minichiello, L O’Dwyer.
Bench: R James, M Henderson, B Ridge, S Michaels.
[Team Changes - Greg Bird, Nate Myles and Ashley Harrison are on Origin duty and Luke Bailey has busted ribs so they are all out. Brenton Lawrence and Matt White start at prop, Luke Douglas is picked in the second row and Luke O'Dwyer is the new lock forward. Ryan James makes his return from a long term knee injury on the bench alongside Michael Henderson and Steve Michaels. ]
THURSDAY GAME PREVIEW
Listen to the Podcast for a full preview, but we like the Sharks. Yes Cronulla have the wobbles but don't get carried away with the Titans - they won't have Bird, Bailey, Myles or Harrison - while Cronulla still have a good team and are at home.
TIPPING AND FANTASY LATE MAIL
SMH and Other Late Mail - Jon Green will beat out Sam Tagataese for a bench spot for Cronulla and Ben Pomeroy should play despite a slight groin strain, while the Titans will take an 18th man but won't confirm their team til Sunday.

THE NRL TWEET'S PICK
Sharks by 7.


NRL TWEET PLAYER OF THE YEAR AWARD VOTERS
J Davies and M Spillane. Follow #NRLTweetPOTY for every Vote in 2012.
COMING IN

SYD: A Minichiello, A Henry, J Leilua, T Moga, S Perrett, B Anasta, D Mortimer, J Waerea-Hargreaves, J Friend, M Kennedy, A Guerra, M Aubusson, B Cordner.
Bench: F-P Nuuausala, L Tasi, T Arona, M Masoe, J Carney, B Takairangi.
[Team Changes - Adam Henry will debut for the club after joining from the Warriors at the end of last year, while Joseph Leilua is recalled after only one week in the NSW Cup. Daniel Mortimer deputises for Mitchell Pearce who is on Origin duty, while Justin Carney is the only addition to a six man bench. ]

BRI: J Hoffman, L Maranta, J Reed, G Beale, D Copley, C Norman, P Wallace, J McGuire, A McCullough, S Anderson, A Glenn, B Te’o, C Parker (c).
Bench: B Hunt, M Dodds, N Slyney, D Lui.
[Team Changes - The Origin group will miss (Hannant, Gillett, Civoniceva, Thaiday and Hodges) this game so Lachlan Maranta, Scott Anderson and Ben Te'o start, and Nick Slyney and Dunamis Lui join the bench. Corey Parker is 18th man for Origin 2 but he will play in this game. ]
THURSDAY GAME PREVIEW
Listen to the Podcast for a full preview, but we like the Broncos who despite the 'Baby Broncos' tag, still have 6 internationals. The Roosters need to start well or the Broncos will grind them out of it.
TIPPING AND FANTASY LATE MAIL
SMH and Other Late Mail - Corey Parker will miss this game after replacing team-mate Sam Thaiday in the Queensland, while the Broncos will announce their replacement closer to Sunday. The Roosters will whittle their bench to 17 by Sunday - expect Justin Carney and either Mose Masoe or Brad Takairangi to miss out.

THE NRL TWEET'S PICK
Broncos by 4.


NRL TWEET PLAYER OF THE YEAR AWARD VOTERS
M McLucas and M Duncan. Follow #NRLTweetPOTY for every Vote in 2012.
COMING IN

WAR: K Locke, B Tupou, B Henry, K Hurrell, M Vatuvei, J Maloney, S Johnson, R Packer, A Mara, B Matulino, E Taylor, S Mannering (c), F Mateo.
Bench: L Brown, Steve Rapira, Sione Lousi, J Lillyman, G Fisiiahi.
[Team Changes - Kevin Locke is back quickly after just one game in the NSW Cup, and Glen Fisiiahi makes way. Sam Rapira badly damaged his triceps and is out for months, so brother Steve joins the bench. There are no other changes to report. ]
THURSDAY GAME PREVIEW
Listen to the Podcast for a full preview, but we like the Warriors to right the ship and beat a Penrith team minus Jennings, Lewis and Grant.
TIPPING AND FANTASY LATE MAIL
SMH and Other Late Mail - Locke should play, while Fisiiahi would miss out. Ukuma Ta'ai might also be a late inclusion for the Warriors. The Panthers should be 1-17, with Michael Gordon still a few weeks away and Blake Austin languishing in NSW Cup with half the starting team from the early rounds.

THE NRL TWEET'S PICK
Warriors by 16.

LW: 0/7 | SEASON 47/98
Eyes does not eat Special Fried Rice... yet.
Make sure you enter NOT The Footy Show's Tipping Competition, the outright winner walks away with an Official Steeden Match ball!