Career Games Played record not yet broken according to statistical sources...

There is no doubt Darren Lockyer is one of the finest players to have ever graced the Rugby League field and when the Broncos, Queensland and Australian captain broke the NRL's record for First Grade Games on Friday night, he was quite rightly inundated with tributes for his accomplishment.

But did he actually break the record by registering his 350th First Grade Game against the North Queensland Cowboys? 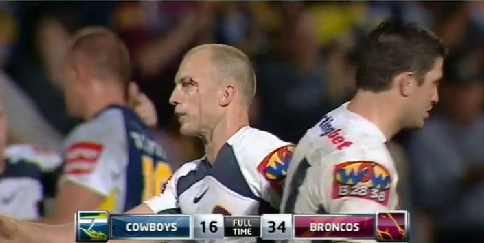 The National Rugby League certainly thinks so - otherwise why would they have made such a big deal about Lockyer's record tying 349th game v the Warriors in Round 22 and then his record breaking 350th v the Cowboys in Round 23?

Well they are correct in assuming Lockyer has played 350 games, but according to the incredibly vast rugby league resource that is Rugby League Project - Lockyer is not the only player to have played in 350 First Grade Games.

Because according to RLP's Shawn Dollin - who raised this anomaly the week before Lockyer's 350th game - former Canterbury-Bankstown and Western Suburbs legend Terry Lamb played in 350 First Grade Games as well.

EDIT: As of November 24, 2011 - it appears the Canterbury-Bankstown Bulldogs have recognised Terry Lamb playing 262 games for the club, meaning added to his 88 for Western Suburbs - Lamb now has 350 First Grade Games recognised. But read the rest of the article anyway - it's interesting to see how this all came about. Rugby League Project Tweet

"We have done extensive research on Terry Lamb's history and there seems to be two seasons where the number of games he played comes into question. The Bulldogs official website lists 23 games for Lamb in the 1986 season, however we dispelled this by finding that he scored points in 22 matches of that season, which left Round 6 against North Sydney and the Major Semi Final against Parramatta as the games we also have him playing in. He missed a conversion in the Round 6 match (Source 1 Source 2) and then YouTube confirms he played in the Major Semi Final against Parramatta. So we find Lamb to have played in 24 games in 1986."
"Then we went back to 1980 with his début season with Western Suburbs and this is where it is confusing. NRL Stats have Lamb playing 17 games but we have him down for 18 games, part of a total of 88 for Wests from 1980-1983 and this is confirmed by a number of sources, Big League Magazines from the time, a 1994 Player Card with stats from David Middleton, the official Bulldogs website and the 1999 edition of the Encyclopaedia of Rugby League players. Why it has changed in recent years from 18 games to 17 games is a complete mystery to us - as is why the Bulldogs stats list him as having played just 23 games in 1986."
"Ultimately one of these numbers is the difference between Terry Lamb having played 349 career games or in fact 350."

The question is - which game did he or didn't he play?

After processing Dollin's findings, some digging into the NRL.com History of League sub-site - it looks like that Major Semi Final in 1986 may well be the game that the NRL has overlooked (Update November 24, 2011 - it was determined that the Round 1 Game of 1986 was the game omitted) given they attribute 88 games to Lamb for his time at the Magpies. Look at the graphic and they list Lamb as having played just 261 games for Canterbury-Bankstown - when as you can see via the RLP stats also below - they have him for 262. 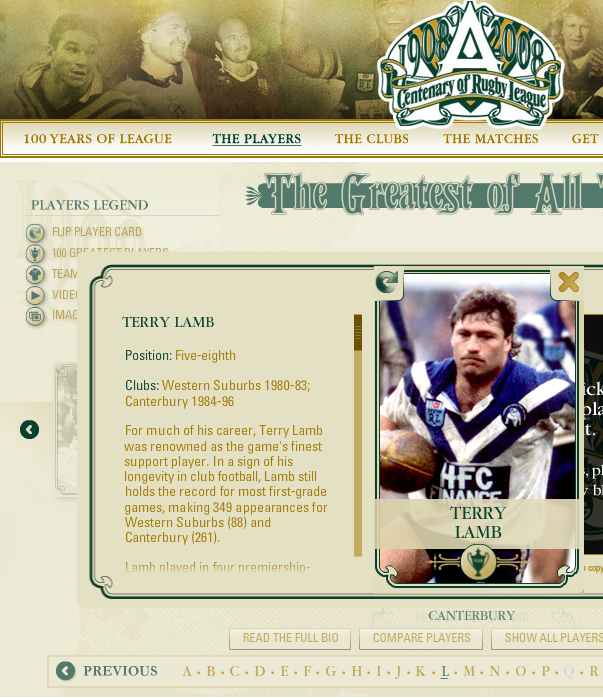 The NRL obviously were convinced they were right with their assumption that Lockyer was breaking a record on Friday - but as Dollin says the signs were there before the game that perhaps Lamb's 349 official games may have been 350.

And if Lamb's career total is not 349 - and indeed 350 - then is it unreasonable to suggest that Darren Lockyer has yet to break the all time First Grade Games Played Record?

Of course Lockyer will break the record (again) this Monday Night against the Knights in Newcastle but will the perspex encased football he received post-match need a new engraving to mark that 351st game as being the one in which he broke the all-time record?

Remember this is not about taking away the record from Darren Lockyer. No one is disputing his incredible longevity in the game, his class as a player on and off the field or his 350 First Grade appearances. And a statistical record is not needed to recognise him as a true champion of the game.

But this information suggests that Lockyer is not the record holder for games played just yet and how is it that Terry Lamb is recognised as playing only 349 First Grade Games if the best public records regarding this statistic believe he actually played in 350?

And if Rugby League Project and Stats.RLeague.com are wrong - can the NRL please explain where these two sites have made a mistake?

Because not only do the stats not align and possibly leave Terry Lamb short a game - all the hoo-ha over Lockyer 350 might have been just a tad premature and results in the question...

Spare a thought for former Manly-Warringah and Northern Eagles star Steven Menzies - as it turns out he might not have ever actually shared the all-time First Grade Games record, with his 349 appearances falling one short of Lamb's (and now Lockyer's) 350 games. While there is no suggest that title be taken off him - should the NRL have ever bestowed it in the first place?

The end result of all this?

Hopefully the NRL realises that making a stats database available to the fans on their website is a good thing... because at the moment the hard-working people behind Rugby League Project and Stats.RLeague.com are leading the way in terms of providing player information to the fans, and they are voluntarily providing a service that leaves the official NRL.com website well and truly in their wake from a historical standpoint.

NOT The Footy Show Episode 77
- Released August 11, 2011 -
Right Click Save Target As This Link if you don't have iTunes.
Kevin Campion talks to us about Darren Lockyer as the champion reaches 350 NRL Games.
Subscribe here for a new Podcast every Thursday.