NRL Tweet Player of the Year 2010 - Round 10 Leaderboard Update


Forget the Dally M Awards - in 2010 the best gauge of the standout players of the NRL Regular Season will come via The NRL Tweet Player of the Year Award.

For too long a combination of short-sighted journalistic bias and the single person voting process has counted both for and against players when it comes to a Player of the Year Award and while we aren't expecting The NRL Tweet Award to surpass the Dally Ms for 'official recognition' we certainly believe this is the best way to conduct the voting process for a Player of the Year Award.

Our process is as simple as it is effective.
We've assembled a group of true Rugby League fans who love their NRL team. Given they'll be watching their team play each and every week - they vote on the best three performers in the game their team plays. That doesn't mean they push the barrow of their own players simply because they are passionate fans of one team - rather it is that passion for the game that ensures they view each game as objectively as possible, meaning that if their own team's players get votes they will have earned them. Given each team is represented by a voter - every game has two sets of eyes objectively viewing the contest and producing Player of the Year Votes that best reflect the best on ground. An added factor to establishing the best of the best is the value assigned to each set of Votes.

The NRL Tweet's Player of the Year Award operates via a 4-2-1 System.
The top player in each game receives 4 Player of the Year Votes - up by 1 vote on the traditional 3. This is to reflect the true value of being the best on ground as opposed to simply being the second (2 Votes) or the third best (1 Vote) - while achieving a 2 or 1 vote is no mean feat, it certainly should not be worth nearly as many votes as a Man of the Match Performance. Plus there are two sets of Votes cast for every NRL Regular Season Game - which means that if both voters are in agreement about who was the best player - that player earns 8 Player of the Year Votes for a Man of the Match performance - the way it should be.
So on to the Votes so far in 2010. 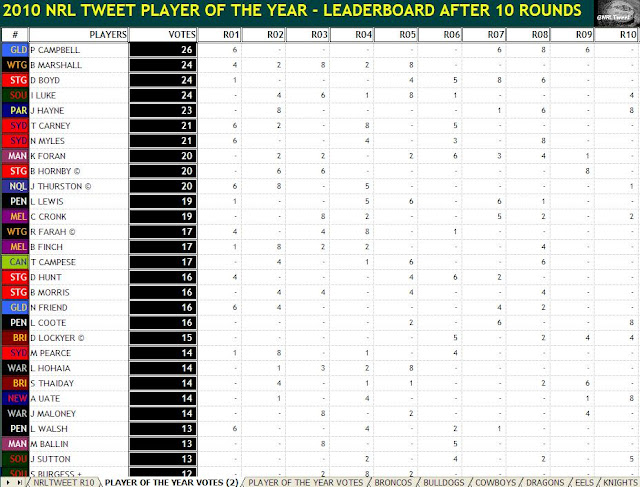 The dynamic Preston Campbell is now leading the race for the inagural NRL Tweet Player of the Year Award. He has surged past Benji Marshall and is the clear leader entering Round 11 with 26 points.
But the race is wide open as we approach the halfway mark of the 2010 Regular Season.
|> South Sydney's Issac Luke & St.George-Illawarra's Darius Boyd are in great form at club level and their votes reflect how good they are going - both are tied with Marshall on 24 points.
|> Parramatta Superstar Jarryd Hayne has picked up 15 points in the past month to cruise into outright 5th with 23 points.
|> The Sydney Roosters are well represented despite their recent form dip with Todd Carney & Nate Myles thoroughly deserving their 21 points to date.
|> Manly's Kieran Foran, St.George-Illawarra's Ben Hornby and North Queensland's Johnathan Thurston all sit on 20 points - but are well within striking distance of Campbell.
|> Some big names aren't too far back with Luke Lewis & Cooper Cronk on 19pts, Robbie Farah & Terry Campese on 17pts and the likes of Darren Lockyer (15pts) & Sam Thaiday (14pts) polling well.
|> Warriors half James Maloney leads the way for all Rookies with 14 points - narrowly ahead of English import Sam Burgess (who is technically not a rookie as he played in England) on 12 points.

Keep checking back on wdnicolson.blogspot.com or @NRLTweet on Twitter for more updates and check out our NOT The Footy Show Videos & NOT The Footy Show Podcasts for weekly leaderboards and insight and analysis you shouldn't have to pay a cent for.
Who do you think has been the standout player in the 2010 NRL Premiership so far?
By W D Nicolson