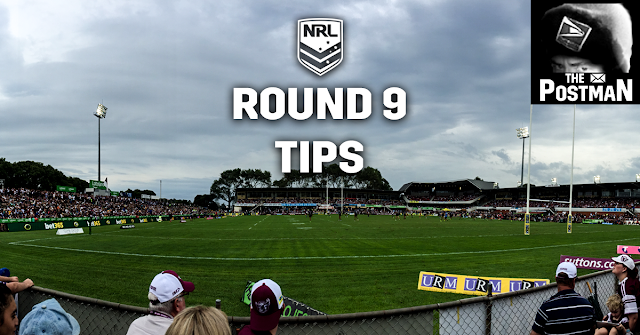 Considering that Manly and the Gold Coast pulled off last few minutes victories - 5/8 could've easily been a 7/8 in Round 8... but as much as you may have wanted to tip the Tigers (who also won late) - the Bulldogs were going just average enough (3 straight wins) to not seriously consider the Tigers - even though the Bulldogs are no world beaters this season.

Anyhoo - onto Round 9 with an almost 61% success rate and the bad news is it's a cavalcade of tough games to pick this weekend. Apologies the tips only drop at lunchtime Thursday but the short short short break between gamedays (with ANZAC Day Tuesday) - means The Postman has only just started to enter his tips for this week, let alone think of good reasons why you should tip along with him.

🚨 Podcast Alert: A fairly prophetic NOT The Footy Show Podcast went out on Monday this week - with predicted signings Ben Matulino and Josh Reynolds taking up a lot of the Tigers cap space... 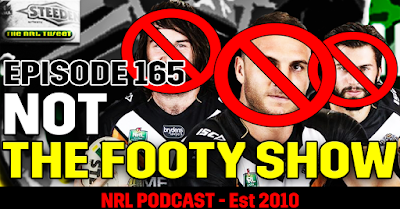 Broncos over Panthers
Really really really really want to pick Penrith here - they match up great with Brisbane and there's no Ben Hunt and Bryce Cartwright has had a chance to get the cobwebs out. In fact, by 7:40pm tonight there's a good chance your local Postman has changed his mind... but if you're not deranged and want to tip well this weekend - pick Brisbane as he has... at this point.

Rabbitohs over Sea Eagles
I've tipped a game involving Manly correct ONCE this year... and that was Melbourne at Brookvale. The other 7 games - I've got it totally wrong. Watch Manly make that 1 from 8 for me as I tip Souths based on the return of Adam Reynolds... and the fact Souths look to be building towards a good win of late... and Manly can't get that lucky two weeks in a row can they?

Eels over Cowboys
This tip totally rests on the fitness of Johnathan Thurston. If JT misses, stick with Parra on the road. If JT plays - change your tip to the Cowboys. You've been warned.

Titans over Knights
Jarryd Hayne to have an absolute field day as the Gold Coast start to remember they are a very good team who are finally getting most of their best players back from injury - Titans by 20.

Raiders over Bulldogs
Canberra have thrown more than a couple of games away this year - don't see that happening Saturday night. The Josh Reynolds news could be great for the Dogs... or he could find himself on the bench within a few weeks... don't forget that Des Hasler loves to get ahead of the game people.

Sharks over Tigers
Cronulla bounce back from getting pantsed by the Titans at home - win this well over the Tigers even though it is at Leichhardt.

Roosters over Warriors
Warriors are a steelier team with Foran in it - I can't doubt that after watching them stick with Melbourne on Tuesday - but their forwards and outside backs are inferior going into this one. Chooks thank you.

Storm over Dragons
Storm by 20. Saints won't win this without Widdop.