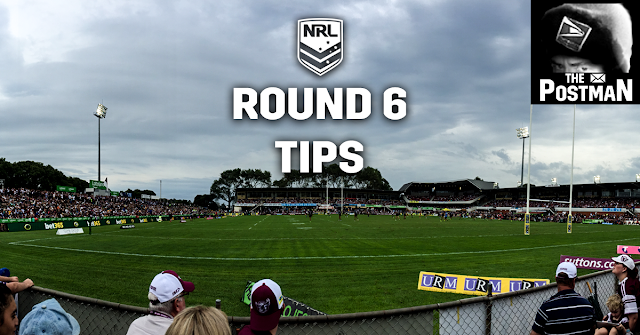 5/8 for 5 straight weeks... thanks for nothing Brisbane, Roosters and Titans.

So we've been as regular as the end results of muesli on a Monday so far this season... just go to the tips and expect what's turning out to be painfully slightly above average.

🚨 Podcast Alert: TWO new NOT The Footy Show Podcasts are out this week already - so fill your commute tonight or tomorrow below:

Roosters over Broncos
Both teams hurt me last week... but no Dylan Napa should tip the balance in the Broncos favour... then you see James Roberts on one leg for a game and remember the Broncos don't pass to Tautau Moga and you lean back to the Roosters... For mine - Pearce/Keary in better touch than Hunt/Milford so let's roll the dice with the Chooks on the road.

Bulldogs over Knights
No real reason other than Canterbury are a better squad on paper than Newcastle... this is in Newy but let's give the Bulldogs yet another game to let us down when tipping them in 2017.

Panthers over Rabbitohs
Yeah there's no Moylan, Cartwright, Peachey, Hiku, Fisher-Harris or Blake... but Souths are Souths and Penrith will still trot out a good pack and their starting halves. If this was at ANZ - yeah I'd favour Souths but this one is at Penrith.

Sea Eagles over Dragons
This one is at Brookie (yes Manly are only 1-2 there this year) but no Dugan is a factor here. Both forward packs have been great in recent weeks - so I'll go with DCE and Tommy Trbojevic being the difference makers on Saturday arvo.

Raiders over Titans
Gold Coast have played their guts out this year with a single win to show for it... Canberra have won 2 of 3 and started looking like the team that many expected them to be this season - so you pick Canberra but you should totally expect a great contest despite the Titans having about 40 players injured.

Cowboys over Tigers
Who knows if Mr I Now Love Parramatta (Mitchell Moses) will turn out for the Tigers or not, but despite the Cowboys not having a hooker and a patched up team in places - you stick with North Queensland at home.

Eels over Warriors
Parra win these kinds of games under Brad Arthur - Kieran Foran is great and all but this is still the same Warriors pack we're talking about. Parra on the road thanks to a Corey Norman master-class.

Storm over Sharks
Cronk kicks the match-winning field goal. That is all.