#NRL 2014: Player of the Year Leaderboard after Round 19 #NRLTweetPOTY #DallyM

Player of the Year Leaderboard after Round 19

The new season is entering the final 7 Rounds and The @NRLTweet Player of the Year Awards are getting very interesting.

After 19 Rounds the current Leaderboard is revealed for the last time but real-time weekly Voting will remain available on Twitter. How do you think the Dally Ms will stack up in comparison?

Check out the #NRLTweetPOTY Leaders below... 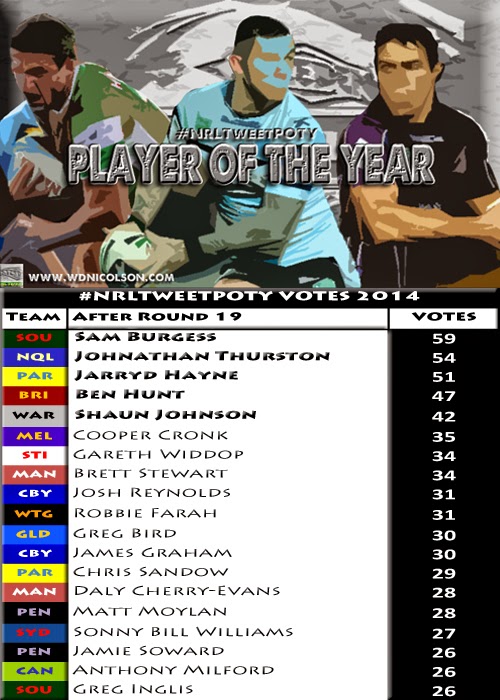 This is the last time we see the Leaderboard - is it a race in 5 now?
Remember you can track live round votes via #NRLTweetPOTY

The voting is broken down into 2 Voters per game and they vote 4-2-1s for the 3 best players on the field. Ideally each voter goes into each game with no bias towards either team - though voters do get to vote on games involving their own teams but are watched very closely in case they get a little too excited!

But that's what makes our system work - 2 voters means you are accountable to the other voter. While it is clearly possible for voters to see games totally differently, if a voter goes for a favourite who did not have a particularly good game - it is painfully obvious and over the years we've been able to weed out voters who may have operated this way in the past - meaning we have as best as possible - a limited-bias factor in our voting.

Votes are put up on Twitter either immediately following the live game or by the next morning - so feel free to engage our voters and ask them to elaborate on why they voted as they did - they'll be happy to do it as 140 characters is only enough to literally give our votes and include game hashtags and our #NRLTweetPOTY hashtag.

Subscribe to the NOT The Footy Show Podcast on iTunes here and although we're not sure how often we'll record this year - it's worth being prepared right?
Follow @NRLTweet
By W D Nicolson