Melbourne production line rolls out another one... 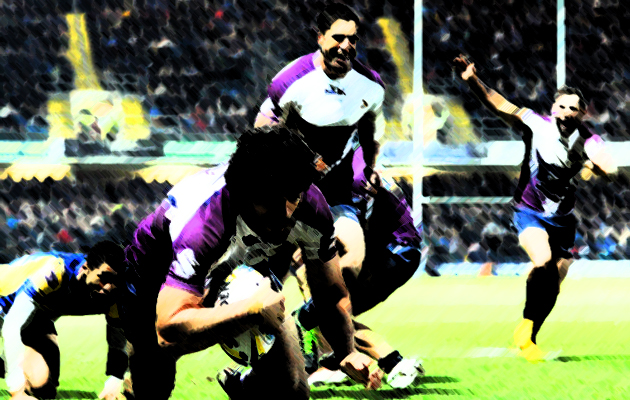 If you watched Melbourne's 18-14 World Club Challenge victory over the Leeds Rhinos on Saturday morning - you'll have taken two things away from the game.

One, the team that had a genuine halfback won the game - that would be Cooper Cronk of the Melbourne Storm, and two, the UK commentary team makes most of their Australian equivalents sound like Rugby League commentary doyens.

Cronk (alongside two other handy players in Cameron Smith and probably the most dangerous player on the field - Billy Slater) made sure the Storm won the match by doing what a top shelf halfback does - control the game.

While the UK commentary team (there's no point naming them as it's just too embarrassing to identify them all) did their best to make it sound like Leeds had Melbourne right where they wanted them... despite trailing for most of the match. There were two disheartening moments of commentary that stood out - one, was giving Storm front rower Jesse Bromwich no credit at all for his superb solo try in the second half, and two, one of the commentators declared that Jason Ryles should have been sent off for a shoulder charge... that the entire commentary box had just announced as not being a shoulder charge. Yes Ryles made contact late on Kevin 'Golden Boots' Sinfield but calling for the 'red card' was excruciatingly laughable and the penalty was clearly sufficient.

But there should have been a third key observation made by every NRL Dream Team and NRL Super Coach participant.

Because The Postman didn't miss the play and - almost as significantly - the minutes played by Melbourne second rower Tohu Harris.

Harris scored a try on his Storm debut - Melbourne's 3rd which was a beauty from deep inside their own half - but he also started in the second row and wasn't replaced until deep into the second half.

He put up decent base numbers with 29 tackles and 11 runs for 108 metres - while adding a try, line break, tackle break and an offload.

DT wise that's a decent effort of 56 pts, while for SC that's a beautiful return of 77 pts.

With Sika Manu and Todd Lowrie leaving Melbourne in the off-season, Harris's main opposition for a spot in the Storm starting lineup (when Kevin Proctor was hurt in the pre-season) was fellow youngster Kenny Bromwich... and Kenny B didn't make the final 17 for the World Club Challenge.

Harris did and he just pumped out a great score, played 65+ minutes and looks an absolute lock for a starting spot in Round 1 for Melbourne.

So go get Tohu now.

Have you moved heaven and earth to get Harris into your lineup yet? If not, why not?
Let your Local Postman know by commenting below or reply on Twitter.