In Round 7, we saw the Tigers and Titans finally win a second game, Melbourne made it seven on the trot and Terry Campese's season ending injury ended the Raiders as well.

This week - the NRL takes the weekend off and the ANZAC Test, City-Country and NYC Origin take centre stage... just not live if the game is on Channel 9.

For more on how we see the Rep Weekend unfolding, check out the Podcast and Preview below.

If you play Fantasy League Games - Dream Team, Super Coach or Fantasy NRL - our comp information is below our Preview Section.

NRL REP ROUND PREVIEW - 2012
19/04 Odds are courtesy of Sportingbet Australia
For some more insight into the markets check out NOT The Footy Show's new resident tipster's site GT Tips http://www.gttips.co.uk
All Kick-Offs are LOCAL time.

NEW ZEALAND KIWIS
J Hoffman, J Nightingale, S Kenny-Dowall, S Mannering, M Vatuvei, B Marshall ©, S Johnson, B Matulino, I Luke, S McKendry, A Blair, F Pritchard, J Smith.
Bench: N Fien, J Bromwich, J Waerea-Hargreaves, A Glenn, G Beale, J Taumalolo. Coach: S Kearney.
THURSDAY GAME PREVIEW
Listen to the Podcast for a full preview, but we like the Australia in a close one. Look New Zealand have a habit of sticking with Australia for 50 minutes and then fading and that may well happen on Friday but with Marshall and Johnson in the team - New Zealand should have some points in them. All the signs point to an Australian win by 20 but this ANZAC Test I'm willing to believe in the Kiwis to make it a close one at home.
TIPPING AND FANTASY LATE MAIL
SMH and Other Late Mail - Matt Gillett will be 18th man for Australia, while Gerard Beale and Jason Taumalolo are the extras for the Kiwis.

THE NRL TWEET'S PICK
Kangaroos by 2.

NOT The Footy Show Episode 102 - Rep Round Video Preview 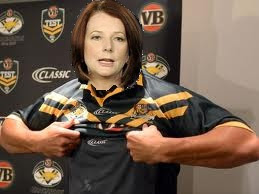 Join Warrick Nicolson, DC Chapman, Matt Duncan and Maria Tsialis as they discuss representative origins of players and can/should it be fixed? We preview the ANZAC Test, Ask is the City v Country still worthwhile? Announce our special membership deal with the Penrith Panthers  and poll your NYC Origin care factor in NOT The Footy Show Episode 102.

We delve back into the NOT The Footy Show Feedback Files with DC Chapman and have a look at life after Terry Campese for the Canberra Raiders.

The size of a game of footy at 80 minutes long - NOT The Footy Show is just about as entertaining as David Furner's game plan.

THE NRL TWEET'S PICK
Blues by 4.

This will be the NSW selection trial for State of Origin 1 in May.
HEAD TO HEAD LAST 10
CITY 5, COUNTRY 4, DRAW 1.
Country have won the last two matches in Albury and Port Macquarie. The last time the teams played in the Central West City defeated Country 40-18 in Orange, but this is first game to be held in Mudgee.
TUESDAY TEAM NEWS

COUNTRY ORIGIN
B Morris, J McManus, J Morris, M King, B Ferguson, T Carney, J Mullen, L Douglas, R Hinchcliffe, M Weyman, B Scott, B Creagh, G Bird.
Bench: T Learoyd-Lahrs, T Merrin, T Sims, C Houston, J McCrone. Coach: L Daley.
THURSDAY GAME PREVIEW
Listen to the Podcast for a full preview, but we like the City Origin off the back of the class in their #6 and #9 to steer them home and secure Hayne an Origin berth (albeit likely at fullback) and Farah a chance to deputise for Danny Buderus. The Country pack is better but I've just got a hunch that Hayne and Farah make this game their own. Mind you - go Country!
TIPPING AND FANTASY LATE MAIL
SMH and Other Late Mail - TBA.

THE NRL TWEET'S PICK
City by 6.

LW: 2/8 | SEASON 24/48
Eyes does not eat Special Fried Rice... yet.
Make sure you enter NOT The Footy Show's Tipping Competition, the outright winner walks away with an Official Steeden Match ball!

If you want a full 2012 NRL Season Preview you'll need to pick yourself up a copy of the 2012 Rugby League Almanac for just $10.00 - where every team is analysed in depth and our Predicted Ladder and Premiership pick is published.
Get The 2012 Rugby League Almanac Now!
So while you go grab a copy, here is the short sharp and boldly premature 2012 Prediction for each NRL Club. If you want our Final Ladder - see the Almanac.
|-| |-| |-|