James Tamou is as Australian as the ANZAC biscuit

NOT The Footy Show declares:
"James Tamou is as Australian as the ANZAC biscuit"

Tamou's a True Blue... from a certain point of view. 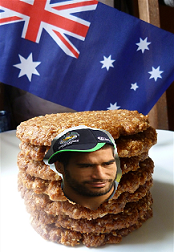 There has been a lot of conjecture this week over the eligibility or the moral acceptability of James Tamou being selected for Australian Kangaroos, and luckily as you've just watched above - NOT The Footy Show has the answer.

His 'defection' to Australia from New Zealand via Sydney via Queensland is - at the very heart of it - no different than a score of other players (in League or many another sports) switching allegiances for whatever their reason may be, and the sooner everyone realises that in almost every instance hypocrisy taints any argumentative opposition, the sooner we can all get on with the job at hand:

The only difference in the grand scheme of Rugby League's ever growing controversial chronicles, is that NSW (via the Australian selectors) are finally playing by the same rules that New Zealand, England and Queensland have been utilising to their advantage for years.

It's that cut and dried.

And the fact is - the only fair way to deal with eligibility is to ask the player point blank:

Who do YOU want to play for?

So all you hypocritical critics build a bridge, get over it and enjoy an ANZAC biscuit and consider what really matters - especially at this time of year, when the term ANZAC should mean more to us than the title of a stupid Rugby League game.

The term ANZAC is something that should unify people - not leave them bickering over why such and such should belong to the different letters.
What do you make of the Tamou situation - are NSW just catching up to the rules?
Comment below.