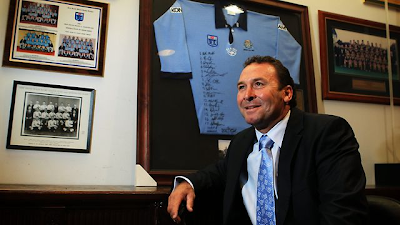 The 'Blues in Waiting' - that is what NSW Blues Coach Ricky Stuart has dubbed the gigantic 51 man squad he named this morning for a three-day training camp to be held at Homebush from Jan 21-23.
Stuart describes the camp as a tool to prepare the next generation of possible Blues for the rigours of State of Origin Rugby League.
“One of the key messages for our “Blues in Waiting” squad members will be that all they can do is prepare and be ready for when this time arrives,” Stuart said.
The big question to come out of the announcement is not so much who was named in the 51 man squad but who was not. 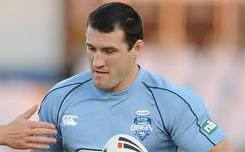 According to Stuart there is a core group of Blues that he has identified to lead the state back to the top of the Origin pile (Paul Gallen [left] is said to be on that list) but given the vast majority of possible Blues named today have zero Origin experience - a large number of experienced players may not have the same warm feeling inside that the named 51 do today.
That's not to say that what Stuart has done is the wrong thing.
Far from it.

In fact this is a great concept to prepare the next wave of potential Blues for the Origin arena - or more specifically prepare them for what their future coach wants out of them. But given the way the NSW Selectors & Coaching Staff have shown scant regard for any player's peace of mind when it comes to State of Origin selection the last few years, this announcement seems a little strange.
While it is great to see so many potential Blues pulled together for a camp, where does this leave the mindset of those players with more than a couple of games experience in the NSW jersey? Or in fact players who have no Origin experience but aren't exactly over the hill themselves?
Given the NSW Squad has chopped and changed so many times in recent seasons under Craig Bellamy, surely it wouldn't hurt Ricky Stuart to get ALL current NRL players with NSW experience together for a similar camp at some stage? 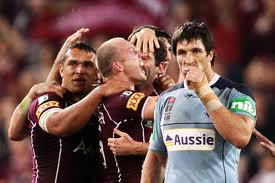 Or at the very least (it MAY have already been done) send out some sort of correspondence that lets them all know that given they have been part of the battle in the past - Stuart will consider them for the future. Veteran Nathan Hindmarsh [right] is one such player who deserves to know where he sits in NSW's plans.
Even if he doesn't have the slightest intention of picking a player - just showing some solidarity and loyalty to players who have been shown very little of late in the State of Origin arena for NSW might be a good start.
That being said - there is no doubt in my mind that Ricky Stuart is the right man for this posting.
But even as you look at the sheer number of names on the squad list - there are a bunch of players with no State of Origin experience who must be bitterly disappointed they didn't get a run.
And that disappointment is magnified when you look closely at the apparent criteria for selection in this squad. It doesn't appear to be a list limited to young players as there are a number of NRL veterans and the squad actually includes some players with Origin experience... which makes some of the names on the excluded list rather surprising.
Some omissions worth noting include:
St.George-Illawarra's Dan Hunt, Trent Merrin and Dean Young.
Canberra's Shaun Fensom, Joe Picker and Dane Tilse.
Cronulla-Sutherland's Wade Graham,
Penrith's Michael Gordon and Luke Walsh.
Warriors' James Maloney.
Manly-Warringah's Shane Rodney.
South Sydney's John Sutton.
Newcastle's Isaac De Gois.
Parramatta's Daniel Mortimer.
Wests Tigers' Chris Lawrence.
Now Ricky Stuart might have a master plan and already contacted the players above and those veteran NSW players not in his 'elite core' but what message gets sent to a player like John Sutton, Dean Young, Dan Hunt or Daniel Mortimer if a kid like Aidan Sezer can get a run in a squad for the elite level of Rugby League?


Again - the concept is good but hopefully there's more to the execution of NSW's State of Origin preparation than meets the eye...

Before you check out the named players - have a read of this article from Ricky Stuart shortly after he was appointed as NSW Coach late in 2010.
Stuart writes the following...
But to beat Queensland we can't have our sole intention being to out-skill them, or out-talent them.
We have to do everything better and smarter.
It has to begin to mean as much to us in this state as it does in Queensland, because I want my players to feel it from the fans.


Well hopefully Ricky - you've considered that your more 'established' players would like to feel the 'love' from you too.
Because am I wrong to suggest that letting players who didn't make this list know that they are still 'in with a chance' is a case of 'doing everything better and smarter' than Queensland?
Here is the Official Press Release on the NSWRL Website

Here is good breakdown by the Sydney Morning Herald.