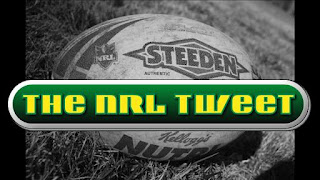 WHAT I WANT FOR CHRISTMAS...

Christmas may be just a few days away but there is another countdown of sorts for NRL fans around the world that might feel just as important... because they are counting down the days until the Rugby League Season returns.

So what does everyone want for Christmas in the NRL sense?

And no we can't alter time, speed up the harvest or teleport you to the start of the 2011 season.

But we can try to advise the NRL about what we want them to do to try and improve the Greatest Game of All.

Click here for Part Two of What I Want For Christmas... NRL Edition.
Here's the Top Ten Things I want from the NRL in 2011... Christmas Edition.

10. Bill Harrigan to stick to his guns and enforce basic rules in Rugby League.
Bill Harrigan came out swinging in his first press conference as Referees' Boss and said that amongst other things there would be a crackdown on Sam Perrett--err players in general walking off the mark at the play the ball, that Off-Sides from kick-offs and drop outs would be punished and that the Scrum, yes the SCRUM would be policed.
The two easiest rules to enforce are the Perrett Rule and the Off-Side Rule.

For the Perrett Rule simply make the Touch Judges do some actual work and mark the point in line where the player is tackled. If Sam Perrett moves forward after he is tackled then PING him! This could also apply to other individuals in the Premiership but the over/under on times Sam Perrett is penalised for this indiscretion has been conservatively set at 51.5.
The Off-Side Rule is something Harrigan himself imposed on the game in the latter years of his refereeing career and he was very good at it. He would simply stand on the attacking side of halfway, further across to one side of the field and if a player stepped over the halfway line before the ball was kicked - he'd PING him!
So actually enforcing those two rules is not that difficult. Which makes you wonder why these two rules were so hard to enforce last year!
As for the Scrum... well in light of the Tigers-Roosters debacle in the Qualifying Final last year there's only so much that we can ask of Santa isn't there?

9. Seriously look into expanding the game into the West and finally give the Central Coast their Bears.
It really is that simple.
If the NRL is going to expand in 2013 or 2015 or whenever, the two locations that make the most sense are Perth with the Western Reds (don't even think about changing the names you marketing types!) and Gosford with the Central Coast Bears.
There are a number of other locations that have a case but as much as I'd love to see a Central Queensland team playing out of Rockhampton, a South Queensland//Ipswich/Brisbane team filling Suncorp Stadium every second week and a second team in New Zealand in Wellington or Christchurch - they are not realistic options right now.
Notice I didn't mention Adelaide?

Well that's because I'm a firm believer in the new Western Reds team being based in both Perth AND Adelaide. The Rams of the 1997 Super League season weren't a complete failure finishing 9th in the ten team comp. Then in the combined 20 team 1998 Premiership they managed to 'improve' to finish 17th. In short the people of South Australia deserve another chance to support a team, given the two years they did get weren't exactly a prime time for selling the game.
Perth offers many positives not least of all the extra TV time slot for live games in the Eastern States. They could share nib Stadium with the Western Force in Perth but what makes the most sense is to split the Reds' home games in a 75% Perth & 25% Adelaide ratio and give the WESTERN Reds a supporter base across two states.
Plus the chance to have a Kangaroo as a club mascot again is too good to pass up.
So bring back the Western Reds!

As for the Central Coast Bears returning... well if you've been to Blue Tongue Stadium for any sporting event you know how good it is and don't think for a second that the Central Coastians who didn't show up to watch the Northern Eagles did so because they didn't like Rugby League.
They didn't like Manly - and who can blame them?
North Sydney got royally stuffed by the elements when trying to build their new stadium in Gosford in the late 1990s and a sudden drop off in quality on the field by the Bears at the same time sealed their fate within the NRL criteria. They were forced into an ill-fated merger with Manly and it came as no surprise to anyone to see their Northern Eagles 'franchise' fall apart the moment Manly saw an opening to reclaim their Sea Eagles' identity.
The northern & north western suburbs of Sydney still remain without a genuine team that feels like their own (although Manly to their credit try to reach out and do support the local competitions). But Manly remain very much the Silvertails to anyone not living on the Northern Beaches, so if the new team was to play out of Gosford they could still attract large numbers of North Sydney fans who grew up with the Bears and hold out hope their team will return. The commute is also quite manageable from a centre like Hornsby or Castle Hill, so it's not a reach to suggest that the fans will travel to Gosford if THEIR team is playing.
Bring back the Central Coast Bears!

8. For the love of all that is Christmas can we please have a dedicated NRL Highlights Show?
I'm sorry but having to sit through Ryan Phelan, Gary Freeman, Wayne Pearce and Gorden Tallis on a Monday Night to see truncated highlights from the weekend's NRL fixtures just doesn't do it for me.
That's not to say they don't appeal to some demographics watching Fox Sports but I'm certainly not part of the one they are catering too.
Demographics aside, how can Fox Sports produce a quality show like 'AFL Winners' - an hour long highlights show from the eight AFL games that weekend (approx 5-7 minutes of highlights per game) and then leave their highest rating sport in the NRL with about 90 seconds of vision and three or four times as much dribble from the 'Dream Team' instead?
I could understand the format if they spoke OVER extended highlights but when the highlights suffer because the producers give more airplay to the rough heads on the panel... well that makes no sense whatsoever.

Another aspect to the nonsensical approach is that Fox Sports did have a show that did give a steady dose of NRL Highlights earlier in the 2000s. It was called NRL Scoreboard and although they didn't get it completely right (it was mainly just tries) - they had the idea. But it went years ago.
Mind you, Fox Sports are not the only ones at fault.
Channel Nine are sitting unaware on ratings gold on a Monday night by refusing to put together their own Round in Review Highlights. Yes we get good analysis via the Sunday Footy Show but that means that at least 3 games per weekend go without review. And remember not everyone gets Fox Sports or can rely on the hit and miss nature of Big Pond Sport's packages on the web.
Memo Channel Nine & Fox Sports - Monday Night 10pm or 11pm is crying out for a NRL Highlights Show in 2011. Replay it to your hearts content throughout the week because it WILL rate.

7. Set up a Playmaker Academy already... Gus get it started with a camp and get Sterlo & Joey involved.
Phil Gould keeps talking about the value a 'Playmaker or Halfback Academy' would bring to the game if set up but here's an idea Phil - get it moving yourself!
That's not me having a go at the two time Premiership winning coach and all around genius when it comes to Rugby League - rather an encouragement for Gould to take the bull by the horns and try to set one up.
He's got close friendships with two of the absolute champions of the game that played halfback in Andrew Johns & Peter Sterling and you can probably add every quality playmaker of the past 20 years to that friends list - he's that well connected.

But the biggest opposition to such an academy (or even a one-off three day camp which I think would be a brilliant short term idea) is the fact that clubs don't want to co-operate with each other if such a program will give the opposition an edge. Especially concerning game plans - which would obviously be discussed by the players to the academy coaches/advisers to help in the learning process.
If that's a wrong assumption - I'm happy to be corrected.
But clearly for this Playmaker Academy to get started - Phil Gould must do all he can to convince clubs to put the game before themselves... no mean feat but good luck to you Gus.

6. Allow Player Trades in the NRL.
To the best of my knowledge a Draft is an absolute pipe-dream from the NRL's perspective, so you can kiss that improvement to the game goodbye.
But a Trade Market could work.
First things first the NRL Players' Association would have to green light it but if the rules stated that no deal could happen without the consent of any player involved and that any contract signed by a said player would have to be honoured for at least one season of any deal (or re-worked upon moving clubs) - would make this happen well before the acceptance of a draft proposal.
Think about it - a player who is approached by his CEO/Coach and told 'we want to trade you' basically faces one of two choices: 1. Embrace the fact they are wanted by another club and move; or 2. Realise that their current club doesn't want them and they won't be playing first grade if they stick around and move on anyway.
Those players who stubbornly refuse to move will still get paid but do themselves no favours at the selection table that's for sure.
As for when you would have a Trade Period?
At the end of each season. Whether it be a one week free for all or allow trades to happen up until the start of or first rep game of the season - players should be made 'available' after the season is complete.
Now the reasoning against trades for years has been 'players can't just up and leave' but in light of the last decade of player movement this is a laughable concept considering how efficient clubs and players have been getting out of contracts.
And I haven't even mentioned how valuable trade talk is to the profile of a sport in the press... imagine how big a story this would've been say at the end of 1995? 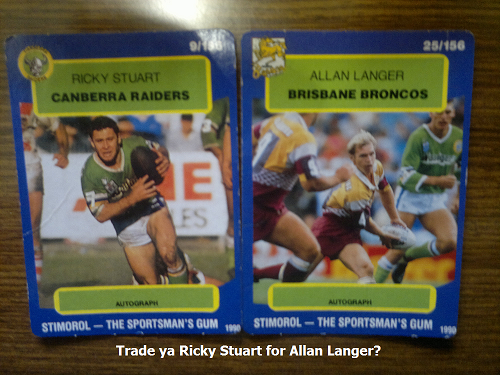 Click here for the The Top 5... would love to hear your ideas via the comments.

And from everyone associated with wdnicolson.blogspot.com, The NRL Tweet and NOT The Footy Show have a GREAT Christmas.
Here's our gift to you... an 2011 NRL Season Countdown.