Benji Marshall Wins 2010 Golden Boot - Now go out & get yourself a copy. 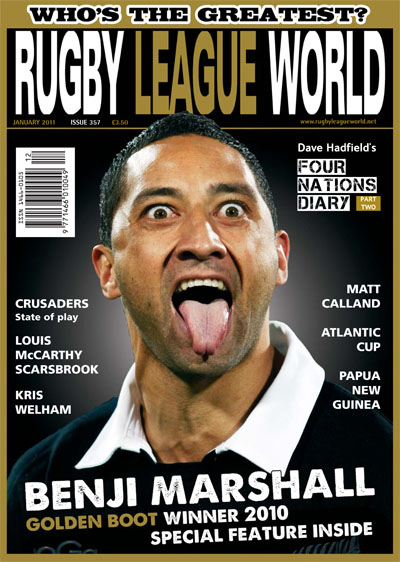 Well it is official: Benji Marshall is the Best Player in International Rugby League.
Rugby League World Magazine announced Marshall as the winner in their January Issue ahead of a field that included Paul Gallen, James Graham, Shaun Kenny-Dowall, Billy Slater & Sam Thaiday.

There is a fantastic write-up on the history of the Award and some in-depth summaries of each nominee in the January Issue - I would highly recommend getting yourself a copy since there may or may not be a contribution in there from this author.

Marshall finished equal 3rd in the prestigious NRL Tweet Player of the Year Awards behind Robbie Farah & winner Todd Carney for the 2010 NRL Regular Season and followed up his great season with the Wests Tigers by leading New Zealand to victory in the Four Nations Tournament.

Marshall's performance in the Four Nations Final was superb - initiating everything the Kiwis did in that game and finding another rabbit to pull out of the hat to win the game in the final minutes.

With International Form counting heavier than any other aspect of a player's year in Golden Boot Voting - it should come as no surprise to see Marshall take out the award.

He finished with 11 of 13 First Placed Votes for the Golden Boot and also features at five-eighth in the World XIII which is based purely on International Form in 2010.


Video: Four Nations Final - Marshall does it all

Do you agree with the panel and their selection?
It is vital to remember that club form is not the sole defining factor in getting nominated and you win the award with your international form in the end of year tournament.

So make sure you go and get yourself a copy of Rugby League World Issue 357 - it'll be well worth it.

You can get a copy mailed to you or download an online copy.

Note: Sadly some members of the media in Australia clearly don't understand the meaning of the word 'embargo' and they ignored the Rugby League World directive not to reveal the Winner of the Award until 11am AEST (12am GMT) on Friday December 3.
Hopefully there is a reason the Wests Tigers were the main culprits - releasing a story at approx 8am with quotes from Marshall and his coach Tim Sheens in order to get the exclusive. Because the moment the Tigers let it slip - the rest of the media followed like wildfire.
We had been sitting on this information since 3am - and respected the requests by RLW to sit on it for a few more hours.

Now go and get yourself a copy of the magazine!
By W D Nicolson