In case you didn't know, the NRL are contractually obligated to continue their scheduling arrangement with Channel Nine & Fox Sports for the 2011 NRL Season and today the Match Schedule as dictated to them by Television Executives was released for the opening Five Rounds.

There are a few surprises in the schedule but as always the Brisbane Broncos are gifted an almost permanent spot on Friday Night Football. Granted being a Queensland team makes them a logical choice for FTA on a Friday but their main sponsors NRMA and Sportingbet will be grinning from ear to ear as their sponsorship dollars get full value in exposure.

The big snub of the schedule heads the way of the 2010 Premiers, with the St.George-Illawarra Dragons not featuring in a single Friday Night game in the first five rounds. While they may not have a home game in that stretch until Round 5 - it is stunning that the reigning premiers won't be seen in prime time before April. 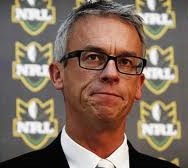 You may not be able to stomach the 'Our match scheduling is not controlled by TV' rhetoric NRL CEO David Gallop spouted at the announcement but here it is anyway:
“The release of the first five rounds and venues today is a reminder for all fans to start planning for next year and with Christmas just around the corner it is a perfect time to purchase your club memberships for the 2011 Telstra Premiership.”

David Gallop tries to say all the right things but the extent to which the game is not self governed is highlighted in the schedule year after year.

Will the Independent Commission change all this?

Well a 'recruitment agency' still has to pick the IC members first and who knows how long that will take...

Anyhoo, here is the Official NRL TV Schedule for the First 5 Rounds of the 2011 NRL Season.
Please Note: All Match Times are Local Times, Channel Nine (Free to Air) Games in Bold.

The NRL Tweet Round 1 Lowdown:
Opening the season with Souths v Easts is a winner. Season 2010 was supposed to be the year of the Rabbitoh but instead it was the Roosters who went all the way to the Grand Final - and of course this should see the debut of Greg Inglis as a Rabbitoh which everyone wants to see.
The other Friday Night game was sadly way too predictable and the Broncos will host the Cowboys at Suncorp - surely last year's Premiers the Dragons against a team that reached the Preliminary Finals in the Titans makes more sense? That's not to say that watching Darren Lockyer v Johnathan Thurston isn't enticing but the Dragons won the comp - surely they open the season even if they are on the road!
The Warriors continue to be handed the early Saturday night game but given they are two hours ahead it doesn't hurt them too much (as it remains a 7:30pm start in Auckland) but the NRL should be giving the New Zealand fans as many Sunday games as possible while the weather remains pleasant. The Storm start playing for points again at home against the Sea Eagles in a fairly decent matchup, while the Titans host the Dragons at Skilled Park.
Sunday sees the Raiders play the Sharks in the 2:30pm Fox Sports game, while the Panthers will face the Knights in the Channel Nine Sunday game. This is the most curious choice of the weekend given the quality of games to choose from.
Finally the Bulldogs and Tigers will try to attract a Monday Night Football crowd of over 20,000 when they probably would've approached 35,000 had it been scheduled on any other day.

The NRL Tweet Round 2 Lowdown:
Parramatta v Penrith is always a good Friday Night drawcard so this isn't a bad call by Channel Nine. It will however be interesting to see if it is the first game. Because if Canberra crush the Sharks and the Broncos beat up the Cowboys and both Parramatta and Penrith lose... who am I kidding - Channel Nine will leave the Raiders v Broncos at the sexy new time of 9:50pm Friday Night.
Melbourne host the Titans in the twilight game at AAMI Park followed by the Tigers v Warriors at Leichhardt then the Cowboys v Knights will be live from Townsville to round out an all live Super Saturday.
Sunday Afternoon sees the Rabbitohs v Bulldogs from ANZ Stadium at 2pm with the Roosters and Sea Eagles to battle it out on Channel Nine from the SFS in an all Sydney Sunday.
Monday Night Football is a little disappointing with the Sharks and Dragons from Toyota Stadium. It may get a crowd of 15,000 but that'll mainly be from the Dragons' fans wanting to see their team for the first time in Sydney.

The NRL Tweet Round 3 Lowdown:
Don't understand why Channel Nine have put the Eels on in consecutive weeks and hopefully the Rabbitohs are 2-0 coming in otherwise this game will struggle to excite anyone. Don't get me wrong Hayne, Burgess, Hindmarsh, Inglis etc is handy but surely with both teams having featured on Friday Night over the first two rounds - it was time to give someone else a go on the telly? They'll be joined by a Titans v Broncos clash which looks good.
Saturday is Panthers v Sharks at 5:30pm followed by Cowboys v Storm which could be in Cairns if there are issues with Dairy Farmers' availability. There are only two games on this Super Saturday.
Sunday is a triple header. The Warriors host the Dragons in Auckland, the Bulldogs face the Roosters at ANZ and then the Sea Eagles play the Knights at Brookvale. Solid lineup.
Monday Night Football asks Sydneysiders to turn out for the 3rd straight week as the Tigers play the Raiders at Campbelltown despite this game being a huge drawcard on a Sunday afternoon last year.

The NRL Tweet Round 4 Lowdown:
Hey look it's the Rabbitohs again! As I said in the previous summary - if South Sydney start well then great, bring on the Bunnies but if they are 0-3 or 1-2 the shine is off them quite a bit. They'll get the Sea Eagles in Gosford in Manly's FNF debut. In Brisbane the Panthers come to Suncorp in a good matchup.
Saturday is a double header for the second straight week with the Raiders hosting the Titans at 5:30pm and the Eels playing the Cowboys at 7:30pm. Both fit the Super Saturday category, good but not great games by any stretch.
Sunday has the Sharks playing the Warriors in Taupo... yes Taupo on the North Island of New Zealand in the early game. The Knights play the Dragons at EnergyAustralia at 2pm and the Roosters v Tigers follows from the SFS in a great choice for Channel Nine.
For the first time in 2011, Monday Night Football moves out of Sydney and Melbourne get a chance to draw some AFL fans when the Bulldogs visit.

The NRL Tweet Round 5 Lowdown:
North Queensland get a Friday Night Football game to host in Round 5 with the Titans visiting. While the Rabbitohs are on again - this time in a tasty matchup with the Wests Tigers from the SFS.
Super Saturday is back to its original three game configuration with the Warriors playing the Roosters in Auckland, the Sharks hosting the Sea Eagles at Toyota and Penrith playing Canberra at Penrith Stadium.
Sunday has Melbourne playing in Melbourne for the 4th time in the first five weeks as they get the Eels at AAMI Park at 2pm. We finally get a glimpse of the Dragons on Channel Nine as they unveil their Premiership Banner/Flag etc in front of their faithful at WIN Jubilee against the Bulldogs - great choice of opponent but why are we waiting four rounds to see them on FTA TV?
Monday Night Football is the Broncos v Knights - the first time we don't see Brisbane on FTA.

You can download the Full 2011 NRL Premiership Draw here.
What are your thoughts on the TV Schedule?

Is there any games that have been ridiculously overlooked or are you happy with the way Channel Nine & Fox Sports have divided up the best games?
I'm particularly interested in how you would have scheduled Round 1.

Tell us via the comments below, via email or on Twitter via The NRL Tweet.
By W D Nicolson