If you are looking for the Result of State of Origin Game One from 2010 - CLICK HERE FOR THE GAME REVIEW + PLAYER RATINGS.

Congratulations to the Maroons - simply a better side than the tripe NSW keep putting on the field. Man of the Match was Sam Thaiday - still dumbfounded as to how - on a night when no Queenslander really shone above the rest and only two New South Welshmen stood up to be counted.

To get a full Origin Two Video Review check out this site on THURSDAY 25 JUNE on the www.wdnicolson.blogspot.com front page. 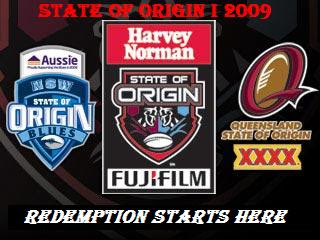 Maroons too classy in the first half after a Jarryd Hayne miss-step cost the Blues the opening try. Queensland skipped to a 24-6 lead shortly after half-time (they led 18-6 at the break) and were in control thanks to tries to Billy Slater (First Tryscorer), Johnathan Thurston and a Greg Inglis double.
Despite a spirited late surge thanks largely in part to a nice rebound or two from kicks the Blues fell short after getting back within a converted try with ten to go and Queensland rubbed it in with a try after the siren to make the final score 28-18 to the Maroons. 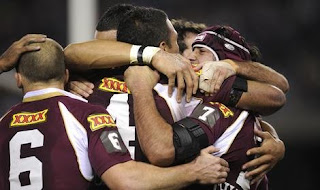 Official Man of the Match: Johnathan Thurston (QLD). Nicolson Sports Consultancy's Lewis-Daley Medal Points For Game ONE:
5 points - Johnathan Thurston QLD (League Player Rating 9/10)Orchestrated the Maroons dominance from the moment Jarryd Hayne's right boot glanced the sideline and looked extremely comfortable setting up his outside men. NSW may have had a plan to rush him and harass him but it didn't work and Thurston was the difference maker. His goalkicking also a highlight.
2 points - Greg Inglis QLD (League Player Rating 9/10)
On another night may have squeezed out Thurston for Man of the Match honours but while Inglis was very good when he injected himself, Thurston was more dominant throughout the game. Kurt Gidley had a brain snap giving Inglis room to move down the left and that was the game just 3 minutes after half time. Beautiful palm and off-load for Boyd's 81st minuter as well.
1 point - Nate Myles QLD (League Player Rating 8/10)
Edged out Ashley Harrison and Billy Slater for the single point in the Lewis-Daley count but deserves the recognition. As ever his defence is stinging and that lovely off-load that created the second phase play for the Inglis try and killed NSW just after half-time was a delight.
ORIGIN ONE Bottom Line:

Queensland took advantage of a Blues pack that played a boring one out style up front and were way too flat in attack. With their pack lacking go-forward until the final 25 minutes - the Blues outside men (Campese, Jennings and Lyon in particular hardly saw the ball in good field position) weren't a factor in the contest until it was too late.

Peter Wallace is not a strong playmaker and that has to be a realisation that the NSW selectors come too after yet another under par performance. He can't play link man when he has to and is prone to the hospital pass as a number of his NSW teammates found out tonight. The only bright spot was he didn't kick the ball on the second tackle inside the QLD 20m zone... but that may have been because NSW barely saw the QLD 20m zone all night.

James McManus was found wanting at Origin level and could be one and done, Brent Kite and Luke Bailey barely made an dent in the opening 20mins (they were better in the final 20) and Luke Lewis is looked stuffed after 5 minutes on the field. Best for NSW were Jennings, Gidley (apart from two big errors in the second half), O'Donnell (has to score in the first half - go under rather than over Slater in the future please!!!), Wing, Hayne and Farah (who I still can't believe was taken off the field at a crucial stage). 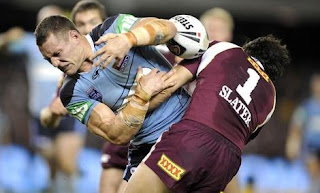 Slater's tackle on O'Donnell to dislodge the ball was crucial in the First Half.
The Queenslanders weren't brilliant and did miss the Justin Hodges option down the right (he is injured - possible medial ligament damage to his right knee in first half) but found the right option when the opportunity arose and were really never going to be headed once up 24-6. Lockyer was quiet but wasn't required to be loud, Civoniceva and Price were solid, Thaiday didn't have much involvement and really only some dumb penalties and poor options by Cameron Smith had him in the 'average' performers for the Maroons.

Game Two is at ANZ Stadium in Sydney on June 24... the Blues have some tough decisions to make at halfback, winger and prop if they are to fix some clear weaknesses in their Game One lineup.

Obviously the NSW 3-0 result is not possible but the people have spoken - 75% of you believe QLD will make it 4 straight series victories!
BRING ON GAME TWO!
CLICK HERE for player profiles for Game I of the 2009 State of Origin Series.
By W D Nicolson