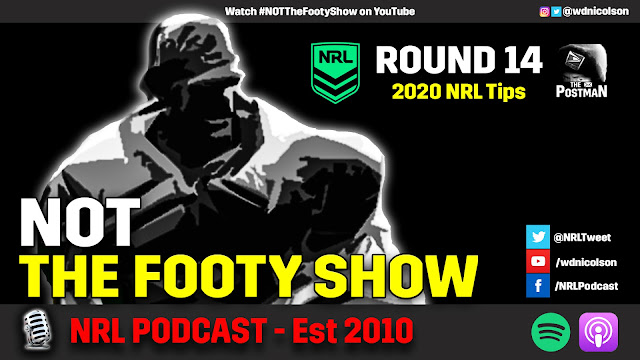 7 from 8 is handy but the Warriors killed us for a second straight week.
They deserved to beat Manly though and the only other game that really sprung a surprise was the Titans sweeping aside the Cowboys but we got that one for you so happy days.
The tipping percentage is now inching towards 70% which would be even happier days territory but this coming week doesn't look as straight forward as Round 13.
Round 13 Results:
Roosters 24 Dragons 16 - Correct
Warriors 26 Sea Eagles 22 - Incorrect
Rabbitohs 28 Broncos 10 - Correct
Storm 41 Bulldogs 10 - Correct
Knights 44 Tigers 4 - Correct
Panthers 28 Raiders 12 - Correct
Titans 30 Cowboys 10 - Correct
Eels 14 Sharks 12 - Correct
2020 TIPPING STATS: 71/104 at 68.3%

Round 14 Tips:
Thursday
Roosters over Storm
The Storm don't have Smith or Munster this week so if the Roosters decide to bring anything close to their A Game for this one - they should be able to handle anything Hughes and Jacks and co throw at them. But the Chooks don't have Cordner, BMoz, Crichton, JWH and Tupou due to injury and Flanagan is seemingly out of favour so they aren't anywhere near better off injury wise than the Storm. But they still have Teddy and Keary and a good enough forward pack to hold Melbourne's without Cam Smith directing traffic. So go the Chooks and hope we get a game as good as the last time these two played.
Friday
Panthers over Warriors
Nathan Cleary and the Panthers have gone up several gears the past fortnight and if they get a sniff of blood in the water against the Warriors they could put 50+ on here. Just can't see the Warriors making it 3 straight wins - not against Penrith in the form they are currently in which is ruthless.
Eels over Dragons
Ben Hunt back to hooker makes sense I guess... but the Saints without Vaughan and Sims shouldn't trouble the Parramatta pack here and Hunt won't have any time or space to do his thing. Parra to put the final nail in Mary McGregor's coffin before the Shane Flana---- sorry Dean Young days begin. Parra by plenty.
Saturday
Sharks over Titans
Cronulla pushed Parra in the wet but lost and it took something special late to run down a bad Broncos team in Brisbane so don't get carried away with the Sharks. By the same token the Titans only beat a pathetic Cowboys team so calm the farm there as well. The Gold Coast benefit big time from AJ Brimson being back but the Sharks still should be your pick here with the game in Sydney.
Rabbitohs over Cowboys
South Sydney have got to travel to Townsville without Wayne Bennett on board the plane but if they drop this game then the blame will rest squarely on Cook, Reynolds, Walker and Mitchell - because if that foursome doesn't tear holes into this North Queensland team for 80 minutes they deserve to miss the Top 8... then again what team outside the current Top 8 right now looks like they deserve to be there?
The answer is none of them - so back Souths.
Raiders over Broncos
If there is even a game (welcome to the first COVID-19 breach punishment consistency test NRL) whichever Broncos turn up to Canberra are gonna find things tough. Canberra got embarrassed last week by a brilliant Penrith performance and will rebound - just can't see Brisbane showing anything new here and Canberra must win if they want to stay in the Top 4 race - and more importantly keep a good buffer zone between them and the teams outside the Top 8. Canberra by 20+.

Sunday
Knights over Sea Eagles
A game you'd normally give Manly every chance in but the Sea Eagles are playing really poorly of late and let what should have been a safe two points slip against the Warriors last week. The Knights woke up and crushed the Tigers on the back of the Kalyn Ponga show and unless Manly find a backbone asap this could get ugly. Knights but maybe not by plenty... maybe.
Tigers over Bulldogs
Michael Maguire is 5-8 as head coach at the Tigers... that's not good considering those losses include matches against the Titans and Warriors - games they simply had to win if they wanted to be considered a genuine Top 8 threat. BUT the season isn't over yet for them (well it kind of is but let's be kind to you Tigers fans) if they can beat the Dogs and beat them well. Canterbury only do anything if the ball goes through Kieran Foran - so if you are the Tigers you defend him well and the rest of the team won't beat you. But this Tigers team just got obliterated by the Knights for the second time this season so pick them with very little confidence they can show up and do what they are supposed to do.