Fantasy Footy: The Postman's Trades ROUND 3 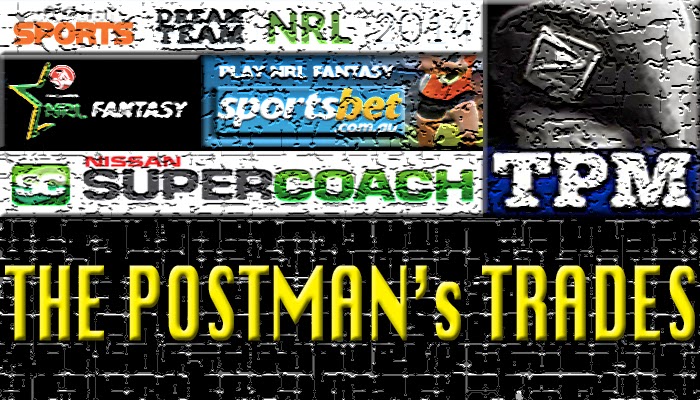 If you play any form of Fantasy Footy in 2014 - you'll want to keep an eye on The Postman's Late Mail every week and see what Fantasy Trades he's doing or thinking about the Friday before each Round.

READ NOW: The Postman's Round 3 NRL Tips and Late Mail

See below for his Round 3 Trade Talk.

The Postman's team name for 2014 is 'This Postman Delivers' / 'The Postmen' and Round 2 delivered the following scores in the four main Fantasy Footy games.

His teams obviously differed slightly across the different games with different scoring setups but in every game he's adopted a similar strategy of basing any success he has - via as many key GUNS as he could fit in.

But is he set to put the trade talk away for Round 3?

Here's The Postman with more...

That's my message this week... look I made a few moves last week to get Tinirau Arona in and get rid of Carlos Tuimavave but the fact I've hit the mark on most of the rookie priced guys (in the sense that they were on my team before Round 1) - means I'm really hesitant to make any more cash grab trades when really there isn't much out there.

For example - I've got Matthew Lodge in DT as a 4th prop, and despite Andrew Fifita being out this and last week, I am not going to trade out Lodge (effectively trading a trade) for Andrew's brother David. Why? Because I'm not sure David will see that much footy when the Sharks are healthy... heck he might not make the final 17 this weekend and brother Andrew isn't due back til next week.

If you don't have Paul Carter - this is a tougher call. Beau Falloon is struggling with a knee injury and may be a late withdrawal... but even if Carter starts at hooker - Matt Srama isn't that far away from returning and even if Falloon misses this week - who is to say he won't be back next week?
So Carter is a trade that might net you 30 or so points this week but he may be out of the 17 by the end of the month. My SBF team doesn't have Carter (I made it on opening night in about 15 minutes after deciding I wasn't playing it...) and for some reason picked Pauli Pauli instead. But if I bring Carter in for Pauli when I've got enough starters this week (despite Fensom and Fifita being out) - I fear I'm just wasting a trade. Plus even if I punted Tuimavave as well in that game - I can't afford Arona so I have shake my head and say no to 2 trades that will be like spun gold later in the year.

Which brings me to the SuperCoach trade that - at this moment - I have made.

I've punted Tyrone Roberts... and released Dylan Napa up front. In their place comes Gareth Widdop and Paul Carter (see above). Now Widdop has serious cash in his short term future (42k) and Roberts may struggle to break even against the Storm (50-odd I think) and the Napa for Carter trade is purely financial as I had Napa in my backrow anyway. It leaves me with CP13, Taumalolo, Ma'u, Peats and Arona with Carter in the backrow - not that different to having Napa there (or not there if he loses his spot again - as I explained above Carter may well do) - so it really comes down to if I think Widdop is an upgrade on Roberts... and the other options in the FB spot (I'd move Hayne to halves).

So the question I'm wrestling with is who is the better keeper?

I've loved watching Tedesco run but he's risky - capable of 80+ and 10 the next week... the big bonus with Widdop is he kicks at goal and though I don't expect a huge number of 80+ scores he should be regularly above 40...

Or I could keep faith in Tyrone Roberts and save two trades...

That's the decision ahead for this arvo..."


Happy to take your questions - see below for how to."

If you want to Ask The Postman any DT, SC, SBF or NRLF Question - do it via @NRLTweet


PS. I am no longer providing content for Virtual Sports - and no - I didn't get sacked but my pre-arranged agreement was from the pre-season to the start of Round 1 only, and the aim was to to drive interest in Dream Team and get as many people to sign up as possible - which we did with 17,000 taking on the DT challenge - a great number since we started from scratch and didn't have the might of NRL.com to advertise it. The downside of that campaign is it cost Virtual Sports some serious coin to make it happen... so as of right now, they will only be supporting their game technically until more resources to pay for the content become available. But don't rule out The Postman returning to the DT News site in the future... maybe. 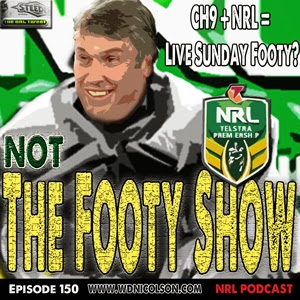 Now you can still subscribe to our NOT The Footy Show Podcast on iTunes here - because you should know by now - we will be recording semi-regular shows in 2014 - but NOT weekly ones.
Follow @NRLTweet
By W D Nicolson