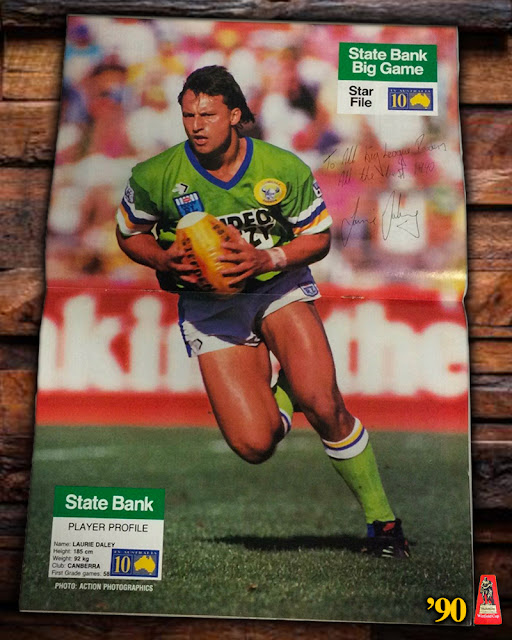 Canberra Raiders legend Laurie Daley was a potent tryscorer in the centres before injuries began to plague him in the early 1990s.
From his debut in 1987 through 1990 - Daley scored 39 tries in 66 games, and was instrumental in Canberra winning back to back Winfield Cups in 1989 and 1990.
The poster above was featured in Big League during the 1990 Winfield Cup season when Daley was still only 20 years old.
By season's end - Daley had scored a try and set up Matthew Wood's match-sealer in Canberra's 18-14 win over Penrith in the 1990 decider.
This coming 12 months after throwing the final pass for John Ferguson's match-levelling try in the epic 1989 Grand Final.
Just four seasons into his career he had already proved to be one of the ultimate big game players of his era.
Daley moved to five-eighth for the Canberra Raiders permanently in 1991 but the next chapter of his career is for another time.
📝 Laurie Daley on Rugby League Project.
===
Enjoy great moments from the Winfield Cup Era (1982-95) by following us on Facebook and Twitter.