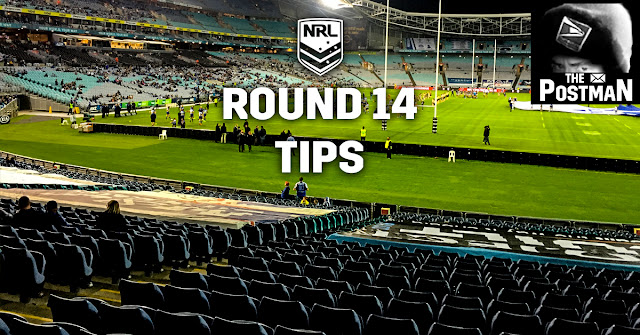 Canberra threw their game v Manly away in the 1st Half only to throw it away again in Golden Point - so 7/7 was soooo close.

Back to the 8 game schedule in Round 14 - then Origin II takes hold of all interest.

Still - these isolated full rounds are just as valuable to your Round 1 score - so be smart and don't reach too much.

Remember half the battle with tipping if you don't go superbly early is to stay in striking distance come the final few weeks so that if you can launch an all out offensive to try and make up some ground - you at least were close enough to do that. If you throw too many hail marys now - you might as well give up and stop tipping altogether.

🚨 NOT The Footy Show Episode 170 coming at ya from Sunday night. 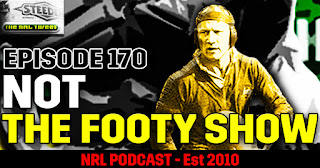 Sharks over Storm
Brutal spot in the the mid-season malaise of the Origin months... mind you Cronulla fans didn't turn up for their season opener after their first title in like ever... so if they get 12k at Shark Park on Thursday night everyone will be stoked. Like Melbourne if Cameron Smith isn't carrying a bad injury... so if nothing comes to light before Thursday night I'm thinking Storm. BREAKING - No Cooper Cronk... back to the Sharks for the tip.

Sea Eagles over Knights
I've tipped games involving Manly incorrectly 11 of 12 times this season... that doesn't mean I haven't tipped Manly every game or against them... but whatever I've done too date has been WRONG! So yeah... Newcastle loom as specials now.

Titans over Warriors
Jarryd Hayne at fullback and the Titans being poor last week in a winnable game is enough for me. And if you needed more - the Warriors are on the road (even at a place they've had success in the past) is compelling this season.

Panthers over Raiders
Canberra have run out of benefit of the doubt cards and the Panthers are no longer doubting themselves - even in a neutral place like Bathurst - you go with Penrith based on recent form. Remember Canberra's 'form' this year has been no guide whatsoever.

Eels over Cowboys
Yeah it is in Darwin but Parra should be raging hot specials given what they did to North Queensland minus Thurston - IN Townsville just a month or so ago.

Dragons over Bulldogs
I think the Dogs can win this... this is the kind of game they get up for after being putrid for a while... but I have to pick Saints. I feel sick...