New Year's Eve 2011 may go down as the day that the Sydney Roosters put themselves back within reach of the NRL's elite, as reports surfaced that they had signed superstar code crosser Sonny Bill Williams.

The five year deal was reportedly set to start in 2013 and would make Williams one of the most highly paid players in the NRL. Something he already was when he walked out on the Canterbury-Bankstown Bulldogs in 2008 after barely one season of another five year deal he signed during 2007 to look after himself.

The new contract is allegedly worth double the base salary he was on at the Bulldogs, yet given the 26 year old has made plenty of coin the past four years playing Rugby in the south of France and for the All Blacks leading into and through the 2011 Rugby World Cup - the decision may not be financially motivated like his defection away from League appeared to be in 2008.

In fact, given what Williams has achieved during his hiatus away from Rugby League, it appears to be as much about the question Williams is likely asking himself.

Get The 2012 Rugby League Almanac Now!
The Roosters are certainly banking on him changing codes again for the challenge as much as the coin, because to potentially add the game's best forward to their squad in 2013, they are overlooking the presence of a lot of good players on their backrow depth chart.

Skipper and five-eighth Braith Anasta will move to the backrow (or to England) either this season or next with the arrival of Daniel Mortimer for 2012 and James Maloney in 2013, alongside the now healthy second rower Mitchell Aubusson, who was one of the breakout players in the game two years ago. They look set to take two of the three starting backrow spots for the foreseeable future. The club also unearthed a talented youngster in Boyd Cordner at the back end of 2011, and with the likes of Lama Tasi, Aiden Guerra, Frank-Paul Nu'uausala, Anthony Cherrington and Tom Symonds already on the books - the backrow is loaded before Williams even arrives.

But IF Williams arrives, he is a game changer for the Roosters and their standing in the NRL.

Although the Roosters made the 2010 Grand Final through a combination of skill, hard work and luck, they were never really considered a unit that had all the tools to maintain their position as an elite team for the next few years. And while their 11th place finish in 2011 wasn't a catastrophic fall, it was still a significant drop out of the top echelon of teams. And it signified that the next few years might be a real learning curve for a team that has begun a youth movement and cut loose a number of key pieces from the 2010 Grand Final team.

But if you add Williams to the remaining core group under Head Coach Brian Smith, the Roosters could be very good in a short space of time.

Because simply put, Sonny Bill Williams is THAT good.

He may have only played 73 NRL games from 2004-2008 but his combination of size, skill, speed and power made him an almost irresistible force on the Rugby League field. And it appeared only injury could contain his potential during his time in the code.

Significantly, his hiatus from the game has actually benefited him long term. Instead of pounding his body week in week out from 2009-2011 in the NRL, he has actually been able to look after his body with his stints with Toulon and then with the Crusaders in the Super Rugby competition, which did not require the same week in week out intensity of the NRL. He will play for the Chiefs in the 2012 Super Rugby competition and probably the All Blacks in the international arena but a full season will still only see him play an equivalent NRL season - but within a less condensed schedule.

So while there are a number of fans who will never forgive Williams for walking out on the Bulldogs (and the code), it has actually been a great benefit to him individually to not be able to return to the NRL until his Canterbury contract expires at the end of 2012.

He will be 27 when (or if) his contract with the Sydney Roosters begins in 2013 and he will have only around 160-170 top class games of football under his belt and has spaced those games over nine seasons in two codes.

Which means that Sonny Bill Williams should be fresh during his prime years as a Rugby League player - which is a terrifying thought if you are an opposition player, and a something to very much look forward to if you are a fan. Another plus for Williams is that he will once again become a face of Rugby League, either through the media or endorsement deals, as the past will be forgotten based on the promise of the present.

And all that adds up to one conclusion, which regardless what you think of him means... 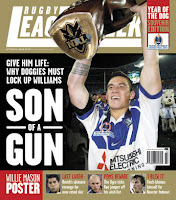 Will you welcome Sonny Bill Williams back to the NRL with open arms or boo the life out of him?