Regular readers of wdnicolson.blogspot.com will know I love my Ice Hockey.

In fact when the Pittsburgh Penguins won the Stanley Cup in June of 2009... I got a little excited.

Well the Penguins will attempt to make it back to the Stanley Cup Finals after falling two rounds short of a 3rd straight Finals appearance - when the 2010/2011 NHL Season starts on Thursday (Friday AEST).

But that's not what this post is about - this is my Fantasy Hockey Squad for my own assault on a Stanley Cup.

I have limited myself to just one Fantasy League of the NHL variety this year so that I will literally live & die by the production of just one group of players - rather than multiple cross-overs if you are in more than one league. 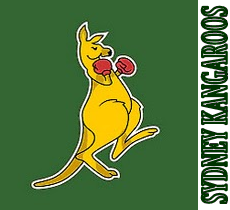 I joined the 'PUCKEYES' League - a collection of Ohio and New York State natives in the USA who have been holding an annual league for a few seasons now - and was lumped with the 4th overall pick.

Okay lumped isn't the right word - yes I didn't get a shot at the two best players in the game in Sidney Crosby or Alexander Ovechkin but landing 2009/2010 Art Ross (Most Points) winner Henrik Sedin wasn't a bad consolation prize.

Here are the Draft Picks made by the Sydney Kangaroos and why I think they'll lead me to Fantasy Hockey Glory this year.

He topped the NHL with 112 points last season so kid can play. Vancouver are expected to contend for the regular season title yet again and playing with brother Daniel is a bonus. Had to pick him given Crosby & Ovechkin were taken (Stamkos went 3rd overall) and I couldn't let my Pittsburgh bias steer me towards Evgeni Malkin way too high.
What I'm Hoping For: 30 Goals & 75 Assists.
Who I could've had (Next 4 Picks): Nicklas Backstrom, Ryan Miller, Malkin & Zach Parise (Daniel Sedin went 9th overall).

Since this league has Face-Off's Won as a category (making it just as important as Goals & Assists etc) - I couldn't pass up another elite centre with 100+ point potential. Thornton doesn't shoot enough for my liking but like Sedin - I've now got two guys with 80 assists written all over them if they stay healthy. Like Sedin he's a Power Play Machine which helps.
What I'm Hoping For: 20 Goals & 80 Assists.
Who I could've had instead (Next 4 Picks): Jimmy Howard, Patrick Kane, Jonathan Toews, Henrik Zetterberg. (Didn't want to take a goaltender this high not named Brodeur but Zetterberg got some consideration)

Needed to address my goaltending with this pick after taking two high scoring forwards early. The fact I could get the Pittsburgh starter in Fleury was just gravy. Might have been a tad high for MAF but he should start at least 60 games for the Pens and 35 wins looks likely. You need goaltending to win a Roto league and this isn't a bad start between the pipes.

What I'm Hoping For: 35 Wins, Sub 2.50 GAA and 5 Shutouts.
Who I could've had instead (Next 4 Picks): Martin St.Lous, Jason Spezza, Jarome Iginla & Rick Nash. (Passed up some real high end goal-scoring talent in Iginla & Nash for goaltending).

Probably reached for Turco here simply because he's joined the Stanley Cup Champion Chicago Blackhawks. When I look at who I could've picked (see next 4 picks) this is a big risk at 45th overall. Turco was a phenomenal regular season goaltender with the Stars for many years but inconsistent playoff performances ran him out of town... to Chicago - did I mention they are the reigning champions? Turco could put up 40 wins if he stays healthy... or the Blackhawks could implode with all their changes and Turco might struggle to win 20. Rolling the dice...
What I'm Hoping For: 35 Wins, Sub 2.40 GAA & 5 Shutouts.
Who I could've had instead (Next 4 Picks): Dan Boyle, Michael Cammalleri, Nicklas Lidstrom & Miikka Kiprusoff. (Should've taken Lidstrom or Kiprusoff in hindsight given they are relatively sure things at D & G and then I watched Zdeno Chara & Sergei Gonchar go in the next two picks before my 5th Round Selection... which is a dud).
Round 5, Pick 52
LW - Alexandre BURROWS, Canucks

Ouch... not only did I not double check the health of Burrows before the draft, I didn't check it within the 90 seconds I had for my pick here. Burrows was picked because of his PIM/Goals factor and the likelihood he'd play some key minutes with Henrik Sedin in Vancouver... yet he's not going to play until the end of November (at the earliest) and I simply stuffed up here thinking it was only a few weeks at the start of the season. When fit he'll be worth having on my roster but I wasted a pick here considering the talent that went in the next dozen or so picks.
What I'm Hoping For: 60 Games would be a nice start... 30 Goals may be within reach if he does as are 80 PIM.
Who I could've had instead (Next 4 Picks): Craig Anderson, Daniel Alfredsson, Jaroslav Halak & Shea Weber. (Any of which would've been a better pick but Travis Zajac & Johan Franzen who went later on before my next pick would've been ideal).
Round 6, Pick 69
CE - Ryan KESLER, Canucks

Pretty happy to get another Canuck who has that extra PIM factor as well as good Goal/Assist totals and as my 3rd centre - the Face-Off's Won bonus. He could see some time on the wing on the PP with the Sedins which would be great and make him a viable play each & every night. Has increased his Point total by 20 each of the last 2 seasons - let's go for the Hat-Trick Ryan.
What I'm Hoping For: 25 Goals, 40 Assists & 100 PIMs - anything more is a bonus.
Who I could've had instead (Next 4 Picks): Patrik Elias, Marian Hossa, Christian Ehrhoff & Antero Niittymaki. (Hossa was in the mix for the whole round... as was young defenceman Tyler Myers from the Sabres who I had on one squad last year and liked - a lot).
Round 7, Pick 76
GO - Jonathan QUICK, Kings

This kid came from a decent end of his rookie year in 2008/2009 to rack up 39 wins for the Kings last season and look very very good. Started 72 Games and was below his best in the playoffs so I'm expecting 60-65 starts but if the Kings keep improving he should get at least 30 wins in those starts. Statistically he could improve - particularly the Shutouts after having just 4 last year. Gives me 3 genuine starters at goaltender which is vital given games played in the Goaltending Position can get away from you early and be very hard to fill late in the season.
What I'm Hoping For: I'd like 33 Wins, sub 2.50 GAA & 6 Shutouts please.
Who I could've had instead (Next 4 Picks): Loui Eriksson, Brian Rafalski, Niklas Backstrom & Jeff Schultz. (Backstrom was under consideration but the Wild might struggle, Antti Niemi of the Sharks went a dozen or so picks later but has a challenge for the starting job in San Jose - Quick doesn't... yet).
Round 8, Pick 93
CE/RW - Joe PAVELSKI, Sharks

Had monster playoffs with 9 goals and has two positions entering this season. Coming off 51 points in the regular season as well isn't too shabby but his Face-Off's Won ability from the left wing spot (he'll play centre in the NHL) make him a valuable pick if only from that perspective. Would like to see him play on the top two lines at the Sharks - but he'll start on the 3rd line with another Kangaroos' draftee - Ryane Clowe.
What I'm Hoping For: Anything resembling his points tally last year (51) and maybe some time on the PP.
Who I could've had instead (Next 4 Picks): Alex Goligoski, Kari Lehtonen, Andrei Markov & Brendan Morrow (Goligoski might take Gonchar's PP time in Pittsburgh and Morrow is a rounded forward but Pavelski's main competition was Brad Richards - who I drafted anyway with the next pick).
Round 9, Pick 100
CE - Brad RICHARDS, Stars

This guy has won a Conn Smythe as Playoff MVP and put up 91 points last season... to get him with the 100th player in the draft is ridiculous. That is ridiculously good. A quality playmaker and the go-to man in the Dallas offence - Richards was a no-brainer this late in the draft despite having 3 centres already on the roster.
What I'm Hoping For: Could push 30 Goals & have 70 Assists if Dallas' offence opens up.
Who I could've had instead (Next 4 Picks): Peter Mueller, Zach Bogosian, Ales Hemsky & Tomas Plekanec (full at centre so would've passed on Plekanec anyway, Brian Campbell was the one I wanted next and he went soon after).
Round 10, Pick 117
RW - Mikael SAMUELSSON, Canucks

What I'm Hoping For: 25 Goals & 60 Points.
Who I could've had instead (Next 4 Picks): David Backes, Patrick Sharp, Brian Gionta & Jay Bouwmeester (obviously waited a round too long to pull the trigger on Bouwmeester as my #1 defender and he went soon after taking Samuelsson. Gionta & Samuelsson were similar players but I already had 3 Canuck forwards to get the 'same team' advantage so went with MS).
Round 11, Pick 124

RW - Teemu SELANNE, Ducks
What I'm Hoping For: 25 Goals & 60 Points.
Who I could've had instead (Next 4 Picks): Sheldon Souray, Andrei Kostitsyn, Kimmo Timmonen & Taylor Hall (With uncertainty around Souray's tenure with Edmonton only Tampa Bay's Victor Hedman was considered here).
Round 12, Pick 141

RW/DE - Dustin BYFUGLIEN, Thrashers
What I'm Hoping For: 15 Goals, 20 Assists and a +/- that isn't terrible on the Thrashers.
Who I could've had instead (Next 4 Picks): Chris Mason, Wojtek Wolski, Matt Duchene & Dan Ellis (Wolski was kind to me last year but I had to start taking some defencemen... given Byfuglien might end up at forward he was really the only consideration outside of the guy I took next anyway).
Round 13, Pick 148

DE - Paul MARTIN, Penguins
What I'm Hoping For: 5 Goals & 30 Assists.
Who I could've had instead (Next 4 Picks): Mikko Koivu, Jamie Langenbrunner, Nik Antropov & Kris Letang (Letang would've been handy but I had my eyes on Martin, while other targets Nikolai Khabibulin & Jordan Staal would go before my next pick).
Round 14, Pick 165

LW - Ryan CLOWE, Sharks
What I'm Hoping For: 20 Goals & 20 Assists.
Who I could've had instead (Next 4 Picks): Jussi Jokinen, Michael Leighton, Shane Doan & Steve Downie (Leighton starts the season injured so I passed on him - mind you didn't stop me drafting Burrows way too high!)
Round 15, Pick 172

GO - Michal NEUVIRTH, Capitals
What I'm Hoping For: Win the Washington starting job and rack up the stats accordingly (30 wins would be nice).
Who I could've had instead (Next 4 Picks): Mike Knuble, Cristobal Huet, Villie Leino & Jason Pominville (took my 4th goaltender after hearing he might start game one for the Capitals, Knuble and later round picks Dustin Brown & Devin Setoguchi would've been safer picks given they'll definitely play).
Round 16, Pick 189

DE - Keith BALLARD, Canucks
What I'm Hoping For: 5 Goals & 35 Assists.
Who I could've had instead (Next 4 Picks): Wayne Simmonds, Ryan Malone, Kyle Quincey & Tyler Ennis (went for a potentially good scoring D-man here after targeting him or team-mate Kevin Bieksa).
Round 17, Pick 196

LW - Dan CARCILLO, Flyers
What I'm Hoping For: Can you say Penalties In Minutes? 15 Goals would be a nice bonus.
Who I could've had instead (Next 4 Picks): Jason Demers, Brian Elliott, Jamie McBain & Jordan Eberle (Would actually have taken a 5th goaltender in J-S Giguere had he fallen here but he went two picks earlier so I settled for Carcillo as the PIM stopgap before Burrows comes back).
Round 18, Pick 213

DE - John CARLSON, Capitals
What I'm Hoping For: 30 Points would be welcome with open arms.
Who I could've had instead (Next 4 Picks): Magnus Paajarvi, Tyler Seguin & Mike Modano (had the 4th last pick so only 3 players followed, saw Marek Zdlicky, Braydon Coburn, Ryan Suter & Cam Barker disappear as defensive options in the picks before I had a crack).
Full Squad 2010/2011 Sydney Kangaroos 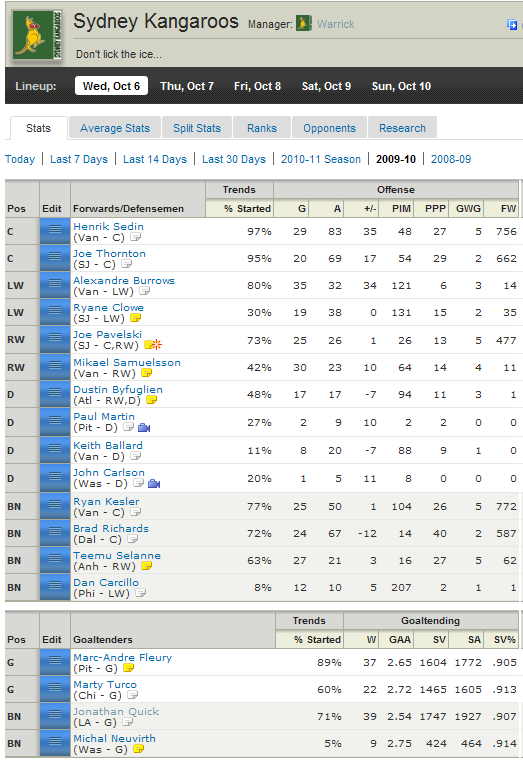 What are your thoughts on my squad?

Apart from the Burrows shocker - did I reach for anyone else or get a steal way too late?