Round 1 is run and done for 2010 and how did your meticulously planned Fantasy NRL team fare?

My team 'Prodigious' was solid with 511 points but the lack of one Johnathan Thurston (90 points) and a severe cutdown on Billy Slater's initial stats (dropped from a 45 to a 33) saw my boys sit in 7,834th after Week One.

The Round 1 leader (The Destroyers - Ben Blackstein) currently sits 250 odd points ahead with 756 in Week One... unsurprisingly Johnathan Thurston was his skipper. Hello 180 points from ONE player.

With Round 2 starting Friday night - The NRL Tweet's Fantasy Blog continues to bring you a better than average guide at the players to pick and those to avoid each week.

TOP 5 PICK UPS - ROUND 2.
One of the tricks to the Fox Sports Fantasy NRL game is adding a player at just the right time. By the right time I mean the week he's going to score a motza of points. Pick the matchups that suit your player and back them to the hilt.
In Round 2 - The Top 5 Pick Ups are...

+ David Stagg, Bulldogs LW 31 - No Michael Ennis for the Dogs so someone needs to pick up the defensive workload... even though Stagg had 44 tackles v the Knights - he'll crack 50 at WIN against the Dragons.
+ Jarryd Hayne, Eels LW 37 - Manly have issues out wide and Hayne will be licking his lips running wide off a sweeping backline play. If the Eels fire - Hayne will be the spark - expect big things.
+ Sam Burgess, Rabbitohs LW 36 - The Titans are no pushovers but the Bunnies will rebound at home and the Friday Night Football stage is set for Slammin' Sam Burgess to explode, expect at least one try or try assist on top of a huge workload.
+ Paul Gallen, Sharks LW 29 - If he can keep his discipline in tact (yeah right!) he should make 35+ tackles and 20+ hitups and if his team struggles as much offensively as they did in Round 1, lock him in for a bargeover try in what may be a bad loss in Auckland.
+ Terry Campese, Raiders LW 17 - His running game was non-existant against the Panthers but expect that all to change as the defensively suspect Broncos visit Monday. Campese is at his best against a hesitant edge defence and could have a field day to the tune of a try, a bunch of goals and at least a couple of try assists.

TOP 5 RISKY MATCHUPS - ROUND 2.
Forwards usually give you a solid base to work with each week in the form of runs and tackles. Halfbacks, Inside Backs & Outside Backs however are lucky dip prizes most of the time. If they score or set up a try you're laughing... but they fail to do anything in attack and their 'basic stats' don't stack up to even a decent score.
So each week try and identify a matchup in the NRL that is going to benefit your strike players, but also keep in mind games where your strike players might get little to no ball or scoring opportunities.

In Round 2 - the Top 5 Risky Matchups are...
- Jamie Soward, Dragons LW 27 - Didn't do a great deal with the ball in Round 1 but still kicked 5 goals and scored 27 points in the win over Parramatta. I think the Dogs are a real chance in this one and Saints really didn't do anything in attack last weekend - Soward's a risk.
- Jamie Lyon, Sea Eagles LW 50 - Gallant performance almost got the Sea Eagles the biscuits against the Tigers but he now must carry a Manly team without Brett Stewart to Parramatta... doesn't run the ball enough to risk taking in this one.
- Luke Walsh, Panthers LW 22 - Had a breezy Round 1 against a Canberra team that hardly touched him. Might find the going tougher in North Queensland and at the end of the day he only scored 22 points in a 34-16 win at home... on the road = pass.
- Corey Norman, Broncos LW 43 - He's on my team but his 45 was thanks largely in to his 3 Line Break Assists & 2 Try Assists. He had just 10 runs in the game v Nth Qld as well. Might be a bust this week but the good news is - everyone else will have him so everyone will suffer.
- Shaun Kenny-Dowall, Roosters LW 54 - Great debut in the centres against the Bunnies but I can't get the image of Chris Lawrence running rings around him all day on Sunday. Plus SKD is a fumble machine at the best of times. Don't expect another 54 this week.

INJURY UPDATE - Thursday March 18, 2010
You should know who is on the long term injury list by now from the pre-season, but here's a short summary of those players injured in Round 1 who are definitely out or in doubt for Round 2. Plus any players who are suspended.

If you've got any questions or comments or contributions - comment here or get us @NRLTweet.
Round 1 Fox Sports Fantasy NRL Leading Team is below alongside my unit 'Prodigious'. 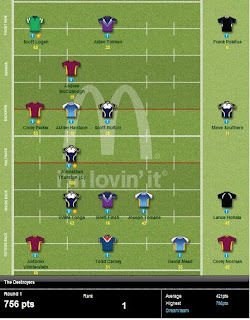 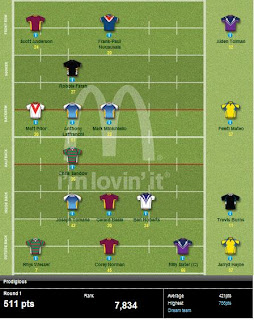 Follow us @NRLTweet - for everything that matters in Rugby League.

Unfortunately time hasn't been on our side to upload all the Individual Scouting Reports on every player listed in the Fox Sports Fantasy NRL Game for Season 2010 - but they will be finished during the early part of the season. Check out those completed here.
Need more footy - no matter how uneducated or juvenile?

Why not enjoy 'NOT The Footy Show' Episode's Three & Four for Round 2 of the 2010 NRL Premiership!