Welcome to a new feature here on wdnicolson.blogspot.com (Edition 01|02) where we take a look at the last week in news, sport and weather and repackage it in a moderately entertaining way.

King of the Nerds crowned.
A Taiwanese man has conquered the 'World of Warcraft' online role playing game and now will turn his attention to getting some sun for the first time in 400 days.
Statistically his report card reads as follows:
390,895 kills from 5,906 quests completed and he's only died 8,543 times in the process. (is that good?)
Perhaps the most concerning aspect of his success is the following forum post by a user named 'Psychi' - a forum newbie with only 39 posts who stated: "I want to be that guy."

Fry (the British Actor/Presenter with the rapidly diminishing waistline) has been with Twitter since the dark ages and regularly tweets his heart out.

How do I know this? 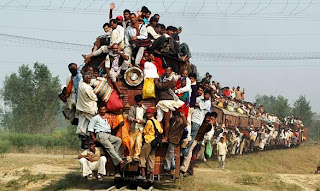 Pick a number and wait in line.
News from India (well not technically from this past week, but this is the first time we've heard about it) is that the population of 1.2 million will be tagged, weighed and released with the Unique ID's project under consideration.
Once you have read this line from the article...
India is to issue each of its 1.2 billion citizens, millions of whom live in remote villages and possess no documentary proof of existence, with cyber-age biometric identity cards.
... you can't help but think they might be turning every Indian into Universal Soldiers with the cyber-age biometric reference.

The head of the project, Nandan Nilekani, then added... "It is a humongous, mind-boggling challenge,” he told The Times. “But we have the opportunity to give every Indian citizen, for the first time, a unique identity. We can transform the country."
Could be the cynic in me, but aren't the 1.2 billion Indians already unique individuals? 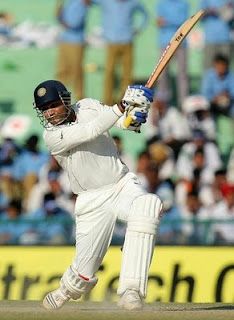 But the most important stat from the game was that India WON the Test Match. Individual stats are nice and all, but you play to win and his performance was the catalyst for the team's victory. 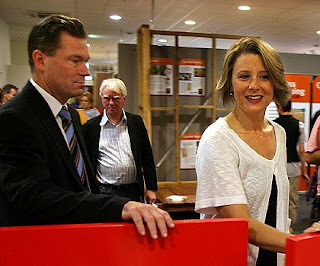 Anything the Liberals can do… Labor can do three days later.
One up-man-ship went to another level in Australian politics last week, when Kristina Keneally became the first female premier of NSW after ambush on former leader Nathan Rees in a sensational backroom coup d'état.

Now the political coup is no big shock, but the fact the Labor Party couldn't let the dust settle on the Federal Liberal Party's own leadership coup (when Tony Abbott ousted Malcolm Turnbull) for more than a couple of days is astounding.
Having followed politics moderately for most of my life, I know that one of the golden rules in the profession is to seize on any sign of weakness by your opposition and show how strong you are in comparison. Yet here, the Labor Party in NSW has decided that instead of taking the political high road (is there such a thing?) and rub the Abbott-Turnbull situation in the Liberal's faces... they've conducted their own display of poor party harmony at state level.
Just once - I'd like to see a political party have the interests of the public at the forefront of their minds... instead of what seat they are warming in their respective parliamentary benches.

PS. Searching for a photo of Rees and Keneally resulted in this superb example of how much value you can put in the word of a politician... From SMH.com.au:
And his Planning Minister Kristina Keneally today ruled out "ever" challenging him for premier and denied having been approached by right-wing powerbrokers Joe Tripodi or Eddie Obeid about such an opportunity.
If a child of mine ever decides that politics is something they want to pursue as a career, I'll be sending them off to a re-screening of 'The Invention of Lying' for a refresher course on how to lie and act poorly at the same time. 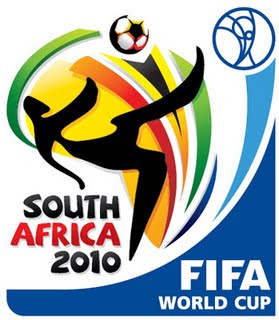 The 2010 World Cup Draw puts Australia alongside Germany, Serbia & Ghana.
It seems like months since Australia qualified for the 2010 World Cup in South Africa (turns out it has) but last weekend saw the Socceroos placed in a group of death alongside Germany, Serbia & Ghana. Basically we're aiming for the 2nd place in the group - which means we'll need to beat both Serbia & Ghana, as you'd expect the Germans to go through as the 1st placed team. If Australia can get to the Round of 16 - England could await us in a game that would hand Australia bragging rights of monumental proportions over the English - if we won.
But we have to get past Serbia & Ghana first and that is far from easy.

In fact, my immediate reaction to the World Cup draw was... we're stuffed. 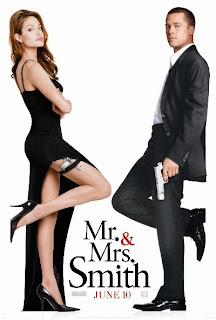 Double Standards are fine for Channel Nine.
The world isn't perfect but when it comes to double standards - TV stations are fantastic at avoiding them. Take the situation involving Tiger Woods (it pains me to be back on this for the second straight week) - they are happy to lead their news bulletins with judgemental scoops on his mistress scorecard, yet the alleged adulterous nature of his actions then become the selling point for the station's screening of Mr. & Mrs. Smith starring Angelina Jolie & Brad Pitt.

Word for word, this was the voice over for the movie preview screened over the week leading up to the Tuesday timeslot.
"The movie that brought them together..."

So we'll judge Tiger for alleged adultery then turn around and congratulate Pitt for finding Jolie through adultery to promote a movie. 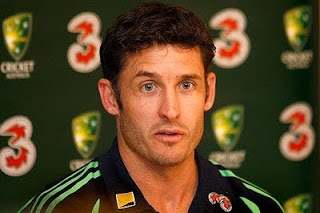 He's old, so let's get rid of him!
This article on why Michael Hussey should be dropped is doing a wonderful impression of a siv – it’s got that many holes in it.
Take the assertion that:
While Hussey has not looked anywhere near his best in this series, his figures have not been disgraceful.

And Hughes is now so deep in a form rut that it looks as if it will be a while before he is back.

Well Mr. Dorries - for the sake of all your readers, I hope your own form can be better when the heat cranks up in the kitchen next summer. Because you've got Hussey covered for 'painful performance' with this piece for the Courier Mail.

Note: I also saw somewhere a quote from a former Australian selector saying that Hussey should be dropped because he hasn't maintained his standards (ie. average)... the guy plays out of his skin for the first couple of years as a Test regular and now he's no longer averaging 80-odd every time he goes out (36.16 since start of 2008) - you say punt him. 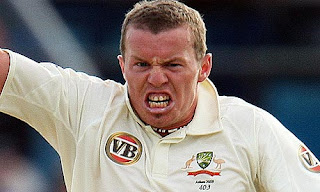 Please Peter Siddle care to back it up?
My favourite Australian cricketer is certainly not one Peter Siddle. In fact I can't think of the last Australian cricketer I disliked as much as the 'aggressive Victorian'. There's another piece on wdnicolson.blogspot.com explaining why I don't rate the 'enforcer of the Australian attack' but for the time being his comments to the press (fresh off a 1 wicket haul in the Adelaide Test Match!) were perplexing...

Meanwhile, Siddle, who has played 14 Tests since making his debut 14 months ago, said it was a steep learning curve being part of an inexperienced attack.
It does make it a bit of a challenge, but on the other hand individually it has made us progress our improvement in the game a lot quicker than we might have," he said.
“If you had a superstar there like a Glenn McGrath, you can get on the back of his coat tails and just be dragged along with him.
"It's just made us all work that little bit harder I think."

What I can't help but think that this is possibly a subtle, yet misinformed dig at Stuart Clark - the man who Siddle ousted from the Test Team in the past year. While Clark made his mark in his very first Test Series in South Africa without Glenn McGrath in the lineup and took 20 wickets as Australia won the Series, Siddle didn't exactly set the world on fire in his first full series against the same opposition in Australia...
Or was he having a go at Brett Lee or Jason Gillespie instead?
It's not like any of these guys have actually done anything at International Level right?
But Siddle obviously has if he's going to express that view...

Quick Singles...
> Great look at why India’s TV money is ruining the sanctity of Test Cricket despite climbing to the #1 spot in the ICC Test Ratings, by Jamie Pandaram from the SMH.
> Test Panel Umpire throws tanty, retires.
> A young South African fast bowler called Pumelela Matshikwe, who I played with at Grade level years ago has made the big time - turning out for the Lions in the South African Domestic SuperSport First Class Competition. He has taken 12 wickets in 3 matches and what a buzz it would be if he could knock on the door for the national team.
Congratulations Pumelela!
> By the way, in the last week Chris Gayle batted forever in the 2nd Innings of the Second Test as the West Indies and Australia played out a draw at the Adelaide Oval.

Who I started following this week on Twitter:
Karmichael Hunt - he of former Brisbane Broncos, Queensland & Australian Rugby League fame is on Twitter and produced this pearl of professional athlete insight:
2 large big mac meals, chicken nuggets, wedges = bloated belly
about 14 hours ago from web

After reading that I felt compelled to suggest he order the 'Bigger Mac' next time he visited McDonalds... don't know what that is? Ask me on Twitter and I'll fill you in.

Quote we would've loved to have heard last week... 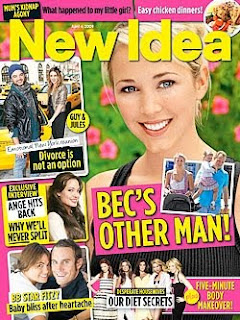 "We Made It All Up."
That's the headline/quote we'd love to see New Idea run with on a future issue and it could happen after a judge ordered the magazine to reveal its sources for an article that suggested Bec Hewitt was cheating on Lleyton Hewitt. Hewitt is the closest thing Australia has to a Tennis Star (he was World Number One earlier this decade remember?) and his wife - a former Australian Soap star (that is TV Serial actress... not the covergirl for Palmolive toiletries) - has been the target of sensationalistic press ever since they got married.

Their theory is she must be bored being married to a professional athlete that spends so much time away... and given she's a household name thanks to her days on Home & Away, has become allegedly 'fair game'.
As a result we've got sources ranging from onlookers, pals, friends, observers, friends of friends and people who are listed in the census with the Hewitt's - telling us the most intimate secrets of the 'Australian power couple'.

The Judge in the case - Robert Lunn - has the final word, which could spell the end of the lucrative career of such sources:
“It is unknown whether there were such sources or whether the defendant has made up the contents of the article,” he has said.

If you've got stories you'd like to see featured in next week's 'The Week That Was' please email me at wdnicolson@optusnet.com.au, tweet me at The NRL Tweet or comment here on the article at wdnicolson.blogspot.com