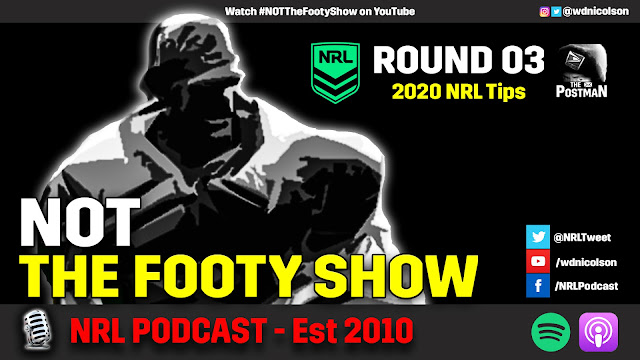 Yuck yuck yuck yuck and one more for good measure - yuck... back to back 4/8 weeks and maybe resuming tipping wasn't such a good idea for The Postman in 2020.

At least he's had the best part of three months to consider just how badly 8/16 looks on the tipping chart and proceeded to pick Parramatta to re-open the season.

20 rounds is going to feel like a long long time if the tipping stays this good...

Round 3 Tips:
Thursday
Eels over Broncos
Nathan Brown is a loss for Parra but Mahoney is fit and that's a huge in considering they were looking at having to play half the season without him and he didn't miss a game. Otherwise Parra are fit. Brisbane don't have Pangai Jr or Fifita and Lodge is a question mark coming back from a knee concern. Parra it is - the road factor shouldn't be one given no one has played footy in nearly three months.

Friday
Cowboys over Titans
Actually think the Titans are a show in this... no Michael Morgan or Gavin Cooper for the Cowboys so a lot rests on Val Holmes and Scott Drinkwater to pick up the slack in Morgan's absence. You can't pick the Gold Coast of course because they have shown nothing to suggest they have the makings of an improved footy team but if you wanted a flyer in Round 3...
Roosters over Rabbitohs
Easts get their first win of the season... surely? No Walker or Roberts limits the attacking options for Souths and the Chooks look closer to full strength this week vs the opening two rounds. Cook and Reynolds to play well but the Roosters get off the goose egg on Friday night as they should win the battle up front.

Saturday
Dragons over Warriors
Saints... if you have to choose one of these two train-wrecks. Yeah, Saints cos McInnes is fit. Don't touch the Warriors.
Tigers over Sharks
Back and forth all week on this one... Cronulla won't have Xerri and Moylan and Townsend could both miss. Tigers have their best looking team of the year and Maguire will have them primed to explode off the training park (because they will have been hating it) so Tigers it is.
Raiders over Storm
Toss a coin and see if Cam Smith's job as the second referee plays a factor. Melbourne were ok to start the season and Canberra were just as solid (although Canberra had two easier matchups). Home factor not a factor... going with the Green Machine here.

Sunday
Panthers over Knights
Again... how do you favour either side with Penrith missing Cleary and Newcastle missing Ponga? Penrith's pack looks very good playing of Koroisau and Newcastle just lost their starting nine in Brailey... so Penny Panthers even though Pearce at 7 inspires more confidence than Luai at 7 for Penrith.
Sea Eagles over Bulldogs
Manly. Canterbury looked rudderless in attack and may stay that way until Kieran Foran is healthy... which itself may never happen. Manly it is.

NOT The Footy Show's Episode 212 Podcast went up Sunday.