Everyone loves a predicted Origin team just before the actual teams get picked... so here we go.

I tried to get inside the head of NSW Coach Brad Fittler as much as is humanly possible and failed... but the below is mostly along the lines of what I think he will pick with bias given to the concept that Fittler will keep looking to the next generation when picking his side.

That means it's hard to imagine Blake Ferguson or Josh Morris getting a run in Game 1 at Suncorp Stadium on June 5.

I'm backing Freddy to back three young guns and a form winger to fill the likely four open spots in the NSW team. 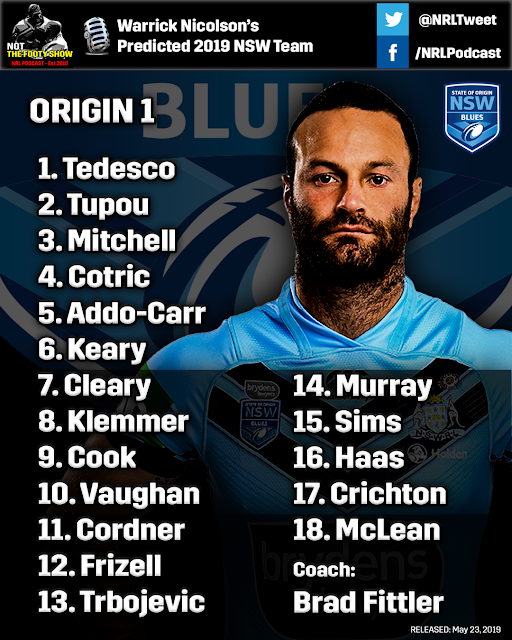 Analysis:
The NSW Backline...
Nathan Cleary will hold onto his spot at halfback, but James Maloney's Origin career is over. Luke Keary has made an irresistible case for a spot in the halves and his time is now. Keary's combination with Latrell Mitchell and Boyd Cordner on the Roosters' left edge secures his spot ahead of Cody Walker (who could find his way onto the bench maybe but it's hard to believe he'd get picked ahead of Keary).
It's because of that left edge combination that I think vaults Daniel Tupou into the team on the left wing, pushing Josh Addo-Carr to the right. Tupou has been just about the form winger in the NRL this season and was NSW's winger when they won in 2014 and has been treated a bit harshly in terms of getting another chance... I could swing and miss on this one terribly but I just don't think Fittler will go back to Josh Morris or Blake Ferguson, and Tupou's form has been immense (even if the media hasn't woken up to it yet). That left edge immediately becomes NSW's strength.
Then on the right Fittler can take one of two directions... go safe with Morris or Ferguson in the right centre spot... or back the kid he had in camp all last year in Nick Cotric. Yes Cotric only just got moved to centre for the Raiders last weekend but he was a centre in the junior ranks and was stuck behind Jarrod Croker and Joey Leilua at Canberra forcing him to the wing where he simply doesn't get enough of the ball. He didn't get into the game v Souths until the second half but when he did he was a factor and made 24 tackles on his ear - so the increased defence might actually be something he likes. Cotric and Addo-Carr is a heck of an exciting concept on the right as well... and as good as NSW's left edge is - you'd pass to this right edge with just as much enthusiasm.
James Tedesco is unchallenged for the fullback job... finding a spot for Tom Trbojevic in a few weeks is Game 2 Freddy's issue.

The NSW Forwards...
The starting forward pack will be retained from last year 8 through 13 - talk that any one of them won't start is fanciful and I just can't see Fittler abandoning Angus Crichton on the bench. He's a certainty for one spot as people have forgotten pretty quickly how many minutes he played last year - 50, 35 and 53. He's in for sure.
But the other three bench spots are up for debate...
Tyrone Peachey looks like he'll be a victim of his own poor form and not having much of a role for NSW off the bench in 2018 (the latter isn't his fault), so I can see Fittler going for Cameron Murray or Victor Radley in the utility role to cover a couple of positions. Yes, Peachey could play that role but I just feel like he'll be left out and although I would go with Radley, the gut feel changes daily and at the moment I think Murray gets the gig.
Tariq Sims played only one game last year - the Game 3 loss - but he played 34 minutes and gives a hard edge to the bench. He can play middle or edge as well and Fittler loves him.
The last spot - held by Jack de Belin in 2018 - will go to a prop. For mine it comes down to incumbent Australian prop Jordan McLean or boom rookie Payne Haas. McLean has been putting up great numbers for the so-so Cowboys but the Australian team is picked by Mal Meninga... so Freddy doesn't have to follow suit and Fittler (according to Phil Gould) wants to pick Haas at some point this series. So the decision is - play safe and take the very good McLean or back yourself and pick the dynamic Haas. Remember this role may only need to give NSW 20 odd minutes... so Haas it is.

So who else is unlucky... well a bunch of players probably deserve to be in the conversion but remember NSW are the defending champions so I just can't see Fittler making mass changes from the players who did the job so emphatically last year (unless he feels like he has no choice). Form is one thing, but NSW winning an Origin series for only the second time since 2005 is serious currency for the incumbents.

So to sum up - a hammy injury to Trbojevic forces one change in the backline, de Belin is unavailable so bench spot open, Maloney is a victim of Penrith's circumstance and Keary's resume in the halves and poor old Peachey has dropped out of sight and out of mind on the Gold Coast.

So four changes is plenty in a winning team, with Tupou, Cotric, Murray (or Radley) and Haas coming in.

Gee that's an exciting squad for Game 1... now we wait to see if Fittler will pick it.

Agree/Disagree with this predicted team? 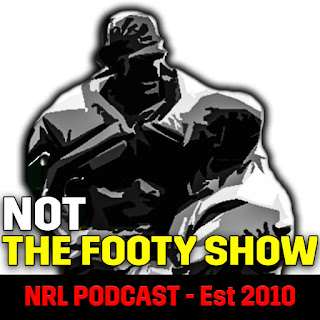