My first memory of Darren Lockyer just happens to coincide with the then 18 year old's First Grade début for the Brisbane Broncos in the ARL.

I was listening to the radio as a teenager myself that Sunday afternoon (when 2UE's coverage was actually all about Rugby League) and can remember hearing the score updates from Parramatta Stadium which proclaimed that the Parramatta Eels were taking it to the Brisbane Broncos at halftime. 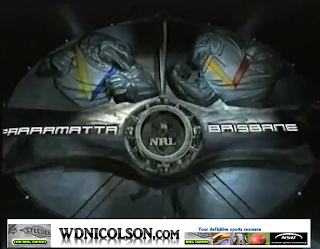 While I believe the Sydney Bulldogs v Newcastle Knights game was being called from Newcastle on 2UE, the score update from Parramatta Stadium had the Broncos TRAILING the Eels 14-6 at halftime.

This was astounding in the context of the competition at that time.

Then Wayne Bennett inserted #35 Darren Lockyer into the fray and the score updates were insane for the rest of that afternoon.

Brisbane ended up winning the game 60-14 and Lockyer was sensational on début. He had a hand in a bunch of tries and became the lead question to my friends at high school the very next day.

"Did any of you go see this Darren Lockyer kid play yesterday?"

While none of us had been lucky enough to be at Parramatta Stadium that Sunday in late June, we got plenty of chances to watch the great man in action from that day forth.

And we've enjoyed every minute of it.

(Australia defeated England convincingly 30-8 in the 2011 Four Nations Final and Darren Lockyer scored the last try of the game... pity about the conversion)

Now I would embed the Video Highlights of Lockyer's performance in that Round 13 game from 1995 but the NRL in all their wisdom... eliminated another YouTube nugget of Rugby League gold (http://www.youtube.com/watch?v=H8e_fT3n9EU), in yet another example of how it makes no sense to kill the promotion of a code you are trying to promote using other mediums.

Lockyer played 11 more games that season (including a rare start at centre in his third game against the Knights) as the Broncos bowed out in straight sets in the 1995 ARL Finals.

Lockyer would play in a Grand Final within three seasons, as the Broncos swept all before them in the 1997 Super League competition.

Here was Peter Sterling's analysis of a then 20 year old Lockyer as he entered his first Grand Final in 1997.

For this portion of his career (1997-2003) Darren Lockyer became the best fullback in the code and remains to this day the most graceful runner I have seen in that position. He was always in the right place at the right time and his stride was just a joy to watch. Through this period he was also a handy (if reluctant) goalkicker and piled up the individual points. Brisbane would win again in a unified competition in 1998 and again in 2000 (with vastly different styles - all out attack in 1998 and a rock solid defence in 2000) and Lockyer was emerging as one of the best players in the game.

Apart from his speed and anticipation - you could see that Lockyer had the ability to read the game with ball in hand as well and his long kicking game was superb for a fullback.

So when Wayne Bennett moved Lockyer from fullback to five-eighth in 2004, the initial surprise was tempered by the fact you felt he would remain an elite footballer in a different position.

But the timing was curious, given he had just played the best representative series of his career in the 2003 Kangaroo Tour (when he almost single-handedly got Australian over the line in each of the three Tests against Great Britain - but again an NRL YouTube fail, no highlights available) and very few people outside of Bennett knew about a kid called Karmichael Hunt.

Lockyer's defence copped a workout with the shift to the halves, but Hunt's arrival at fullback made the Broncos even more potent. So Bennett clearly knew what he was doing.

By 2006 the Broncos had found a way to overcome their late season slides of previous campaigns and Lockyer produced what I believe is the best game I have ever seen him play.

It was the 2006 Preliminary Final against the Bulldogs - a game that saw the Broncos down 20-6 at halftime but Lockyer was doing everything he could to keep the Broncos in the game.

Then he found another gear (with Shaun Berrigan as his excellent foil) and the Broncos stormed home to win the game 37-20 and Lockyer received the first ever 10/10 in NSC's League Player Ratings.

That performance preceded another dominant display in the 15-8 Grand Final victory over the Melbourne Storm and Lockyer had taken HIS team to the premiership.

That would be Lockyer's final foray into a Grand Final, as a serious knee injury ended his 2007 season prematurely and would hamper him throughout the next two years. His 2010 and 2011 seasons were once again outstanding but another injury (this time a broken cheekbone in the Elimination Final against the Dragons) would halt his and Brisbane's charge to a fairytale Grand Final appearance in his final NRL campaign.

The upside is that Lockyer's final play in First Grade Rugby League was a match-winning field goal in extra-time to eliminate the defending premiers St.George-Illawarra, but the question of 'what if he had been healthy?' will linger for many years to come (the Broncos were knocked out the next week against the eventual premiers Manly) not only in the minds of Brisbane fans, but probably in the mind of Lockyer himself.

So as many Australians (and Rugby League fans) get up in the wee small hours of Sunday morning, we will watch with tempered joy as the final minutes of a great Rugby League career wind down.

The last truly great player to also go out with a Test match appearance for the Kangaroos was Mal Meninga in 1994 (albeit against the French Highlights Here but he had just completed a full Kangaroo Tour of Great Britain Highlights Here after winning a premiership with Canberra) and something to keep in mind, as far as my memory serves, the absence of Big Mal was not felt until the following year when the 1995 season began.

So enjoy Lockyer's Last Stand and savour the final moments of his career as he enters retirement.

But don't be surprised if come Round 1, 2012, the loss of the great man is a much greater burden to bear...

Here are two tribute videos from YouTube - saluting the greatness that is... or soon to be was, Darren Lockyer.
Thanks for the memories champion. 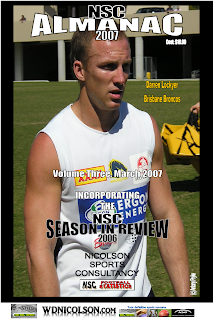 Darren Lockyer graced the cover of the last NSC Rugby League Almanac in 2007.
The 4th Edition of the must-have League Annual will be available in early December - to pre-order a copy please email wdn@wdnicolson.com.
It will feature Previews of all 16 Teams for 2012, Extensive Team Depth Charts, Player of the Year Voting Breakdown from 2011, additions to the NSC Honour Roll, a 2011 Representative and NRL Review and our special look at the Top 200 Players in the NRL.
Plus much more.
]-[ ]-[ ]-[
2011 FOUR NATIONS FINAL PREVIEW

GAME PREVIEW:
Despite this being Lockyer's last ever game of Rugby League, England will fancy themselves in front of a sell out crowd at Elland Road in Leeds on Saturday Night (Sunday morning 4:45am Sydney/3:45am Brisbane time).
But that optimism is curious to say the least.
Australia may have struggled initially against Wales (they won 56-14 after trailing 8-0 20 minutes in) but they have beaten New Zealand 42-6 in Newcastle in a mid-October Test, then New Zealand against 26-12 to open the Four Nations and beat England 36-20 in November - a game that the English commentators would have you believe was inexplicably taken away from the English on a non-try call by rookie referee Henry Perenara.
England - outside their 16 point loss to Australia - defeated France 32-18 in their Four Nations warm up, then swamped Wales 42-4 and knocked the defending Four Nations' champion Kiwis out with a 28-6 result last week.
So while England might have three wins and just one loss in their four tests leading up to this Four Nations Final - they have really only beaten one genuine opponent in New Zealand and Australia crushed the Kiwis by a combined score of 68-18 over their two tests.
Simply by going on the results and having watched Australia and England play - there is no denying that A. Australia are going very well and B. England have beaten everyone who they have come up against... bar Australia.
Lockyer may not be the player of that 2003 Tour but he is still the master until he retires. And when you consider the quality that surrounds him tonight in the playmaking department vs. what England can throw against the Kangaroos, and just one result boils to the surface. 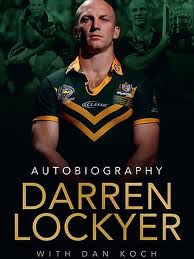 If you would like to learn more about Darren Lockyer's career - grab the autobiography here.
]-[ ]-[ ]-[