Adrian Morley is an obvious choice, given the big unit played in three straight deciders (2002-2004 - winning with the Sydney Roosters in 2002) but it would not be surprising to hear Ellery Hanley or Martin Offiah as two popular options. Hanley is arguably the best English Rugby League player of the last 30 years and Offiah was a try-scoring sensation with a great nickname ('Chariots Offiah').

The Black Pearl (Hanley's nickname) is a guess that at least fits the criteria - he played in the 1988 decider for the Balmain Tigers (infamously KO'd by Terry Lamb early on) and 47 First Grade for Balmain in 1988, then Western Suburbs in 1989 before returning to the Tigers in 1996 and 1997. Offiah on the other hand barely featured in Sydney club football - playing in just three seasons (1989 and 1993 with Easts and 1991 with St.George) for only 27 First Grade Games and zero appearances in the Finals let alone a Grand Final.

But both were superstar talents who came to Australia during the Northern off-season and backed themselves against the best. 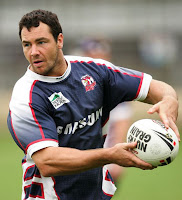 While it is a shame they didn't stick around long term - the fact is their presence in the game was a huge boost for club football in Australia.

Now the answers to the quiz are Adrian Morley with the Sydney Roosters in 2002, 2003 and 2004, prop Harvey Howard with the Brisbane Broncos in 2000 and hooker Lee Jackson with the Newcastle Knights in 1997.

Howard and Jackson were internationals but didn't leave a lasting impression on the game in Australia.
But now in the space of 12 months, the NRL has captured two top flight Englishmen in Gareth Ellis (who joined the Wests Tigers in 2009) and Sam Burgess who will play for South Sydney in 2010. Both have the ability to leave that lasting impression that the NRL needs. 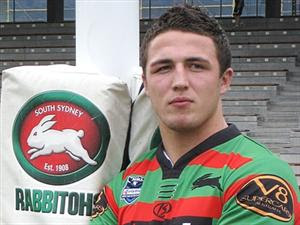 When Sam Burgess decided to leave the Bradford Bulls at just 21 years of age and with three full seasons of Super League already under his belt, it was for one reason: to try and make his mark on the NRL.

At 6'5, 112kg the lad from Dewsbury in West Yorkshire doesn't lack size (think a more athletic young Jason Ryles) but it is his footwork and skill that has set him apart from the average prop coming through the rugby league system.

His future may be as a lock forward or second rower with his new club South Sydney (given the depth of the front row at the Rabbitohs) and his new coach John Lang will be salivating at the prospect of having two ball runners like Burgess and Brisbane import Dave Taylor in the team. These two are potentially an even better combination than Lang's premiership winning 'hair bears' duo of Tony Puletua and Joe Galuvao at Penrith.

But explosiveness, footwork and skill are not the only attributes that set Burgess apart. He loves the tough stuff close to the ruck and will take it up when his team needs a big run and although he isn't a tackling machine by any stretch - he can hit (we're not to blame for the soundtrack).

Burgess plays very direct in attack, he'll look to run through the line rather than just to it - which if you've got footwork results in... well in case you haven't seen it before: Sam Burgess Try v Australia in 2009 Four Nations Final.

In that spectacular effort, he made Petero Civoniceva look like a rookie defender and had the audacity to dummy to his supports and run past Billy Slater to score under the posts. Burgess had an almighty impact on that Four Nations Final* - including another try after halftime that put England in front with half an hour to play. In the second try he sees a gap and hits it at pace - running off a Gareth Ellis short ball near the line.
(*Note: England lost the match 46-16 - conceding six straight tries after taking the lead.)

Both tries give you an indication of the attacking game Burgess brings to the table. He is a monster physically and yet in both tries used his head and skills to turn opportunities into points.

Big fellas are a dime a dozen in the game these days, but those ones who can add footballing brains to their brawn are pure gold. 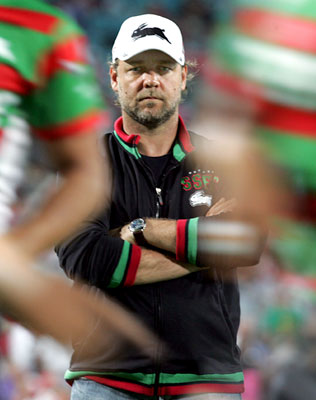 The NRL should count their blessings that South Sydney owner Russell Crowe didn't take no for an answer from Bradford when his brains trust decided Burgess was too good not to throw the kitchen sink at.

What Crowe's purchase of Burgess brings is an English player to the NRL BEFORE his prime (not even Hanley, Offiah, Morley or Ellis had this going for them - as all were seasoned footballers in England) and his presence will draw increased interest from fans not only in the NRL but also the UK Super League.

Because when Burgess is a hit for South Sydney - fans of every other NRL club will start watching the Super League a little bit closer, wondering who their team might target for next season. And every fan in the UK will be watching Burgess closely to see how their boy is doing.

Perhaps the saddest aspect of the Burgess and Ellis defections is the generation of English players who didn't test themselves in the Australian arena. Morley was just one of a group of incredibly talented players that had the opportunity to explore playing in Australia but didn't. As good as Jamie Peacock, Keiron Cunningham, Stuart Fielden, Kevin Sinfield, Danny McGuire, Andy Farrell and Jason Robinson are/were - none of them took the chance to enhance their reputations and challenge themselves in the NRL, while they were considered 'the best in the game' by the press. Although Sinfield and McGuire still have a chance to switch while they are in their prime, there will always be a sense of disappointment in Australia that we never saw the best that England had to offer over the last dozen years - week in, week out.

In Burgess however, the English game has a chance to make a statement - we can breed ours as good as yours.

Because despite a stirring 60 minute performance in the 2010 Four Nations Final, England has not produced the same level of game-changing talent that the NRL has in the last ten years. As good as the above listed Englishmen are or have been - they haven't been able to turn the tide in international football.

New Zealand who broke through for a 2005 Tri-Nations crown and then won the biggest one of all - the 2008 World Cup - had their game breakers emerge through the NRL competition. Their success was no shock for those who have seen the influx of quality Kiwi players in the NRL over that time frame.

With Burgess now in the NRL - will the best talent Great Britain has coming through the ranks follow his lead and challenge their international peers in the best rugby league competition in the world?

As good as Burgess is, on an international scale he will need help to get England over the hump and beat Australia in a Test Series. This doesn't mean that every good player in Super League should come to Australia, because we all know that unless you're a top flight footballer the Australian game can chew you up and spit you back out very quickly... just ask Chris Thorman, Richard Mathers (albeit injury cut short his stay), Jordan Tansey, Keith Mason, Ian Sibbit etc... Nor is the request wishing for the best player at each Super League club to play in the NRL - but the special ones... those who could use their experience in the NRL to better the international game - get on the plane tomorrow.

The NRL is better off for having Sam Burgess in its ranks and International Rugby League would benefit greatly if more British players the quality of Burgess and Ellis defect in the next few years. 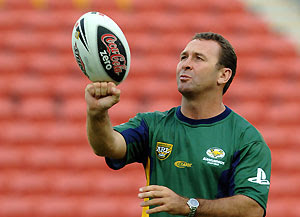 The final word on the issue goes to former Australian and current Cronulla-Sutherland Sharks coach Ricky Stuart who had this to say back in 2006 as the Kangaroos took part in the Tri-Nations.

"I won't go singling out individuals but I think there's a number of (British) players that would do very well in the NRL. They'd become better footballers very quickly and they certainly have the ability to handle the NRL."

"I think there's some players there that it would be great for their careers. If they become better players then it's going to benefit international footy two-fold."

Ricky Stuart has always been a passionate believer in the value of the international game and despite losing his job as Kangaroos coach after the 2008 World Cup Final - he always will push for a stronger battleground for the next generation of footballers to be part of.

His dream was to play for his country (and he managed to do it in both Union and League) and in 21 year old Sam Burgess - the English game now has a player for all youngsters to truly look up to and think 'that could be me someday'.

Rugby League fans - get excited, Slammin' Sam Burgess is here where he belongs.

PS. As a follow up to the quiz - can you name the 4th and 5th last Englishmen to have played in a Rugby League decider in Australia?
By W D Nicolson