Breakdown of the NRL Rookie Class of 2008 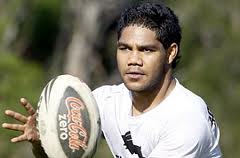 Does the 2008 Rookie class lack a stand out performer or indeed a player we’re certain will be a superstar in the game.

It is really tough to pick the winner of the Rookie of the Year award this season because there simply hasn't been a irresistible candidate appear i nthe NRL to date.

When you have to factor in the eligibility angle (Big League seems to go with the no more than 3 NRL games before this season rule - so we'll stick with that) - it appears that perhaps the best prospects from the 2008 season are yet to play enough footy this year to put their names up in lights for the Rookie of the Year Award.

So here’s a look at qualifying contenders broken into two sections based on games played in 2008.

From that comprehensive list and mixing the value of total and short term impact on their sides, my Top 5 options with at least 4 first grade games so far in 2008 are below:

Chris Sandow, Rabbitohs
With the Rabbitohs mid-season revival he burst onto the scene in a big way with his kicking game standing out. But with the Rabbits no longer in the playoff race and his form tapering off in recent weeks, that combination probably rules Sandow out of the running for the award which will be weighted significantly towards a Finals bound player when the votes are tallied up.

Sonny Fai, Warriors
Since moving Fai to the centres, Warriors Coach Ivan Cleary has finally gotten the best of a huge talent who wasn't up to the physicality of the backrow at this stage. Out wider he's getting time with the ball to use his size and skills to his best advantage and is arguably part of the hottest centre combination in the game at the moment with Brent Tate. A big chance if he keeps up the involvement and the Warriors can stay in the playoff hunt for a few more weeks yet.

Wade Graham, Panthers
For a 17 year old he's made a strong contribution to the Panthers since debuting in Round 15 against the Dragons. Physically he can handle the top grade (although it is a bonus for his body that he hasn't had to play the entire year) and his skill set has been a welcome addition to the Panthers attacking structure. Was Penrith's first choice long kicker when he came into the top grade but has scaled that back in what could be an attempt by Coach Matt Elliott to get Graham to run the ball more. And it is working with Graham's runs in the past two weeks nearly as many as his total in the first five games. If Graham can push the Panthers into the playoffs, that and his all around package will garner most of the votes at the Dally Ms at the end of the regular season.

Anthony Cherrington, Roosters
At the moment the Roosters are getting quality minutes out of the towering second rower. Has slipped under the radar with the big names in the Roosters starting back row but Cherrington shapes as a big wildcard in the run towards September. Isn't playing more than two 15min spells a game but he looks a threat every time he runs the ball."

David Williams, Sea Eagles
A crowd favourite as much for his 100% effort as his werewolf getup. Williams took the chance to play in first grade when Michael Bani got hurt with both hands and has been a player very much in the mold of his wing partner Michael Robertson in the sense that Manly Coach Des Hasler knows what he's going to get each week - effort and the ability to finish. If he takes out the award he won't be the 'sexy' pick as in years past but he'll have earned it."

But the race is wide open and I think if the Panthers make the Finals then Wade Graham will get the Rookie of the Year award.

With the run home to the Finals still ahead of us, there is time for a rookie to stand up and make a difference and break into that Top 5 - the main contenders are Akuila Uate, Marc Herbert, Daine Laurie, Tony Williams and Ben Barba (even though the Bulldogs are out of the playoff picture he could be best used at FB).

But at this stage it appears the bulk of the players with multiple games in the NRL this year lacks the class of recent seasons.

Especially when you stack it up against the quality of the 2004 Rookie of the Year class which had Karmichael Hunt (winner), Sonny Bill Williams, Brett Stewart, Mathew Head, Justin Poore, Reni Maitua and Anthony Tupou as genuine contenders for the award.

But even in that year the likes of Todd Carney, Cooper Cronk, Feleti Mateo, Jeff Lima, Jerome Ropati, Glenn Stewart and Manu Vatuvei either had their first taste of NRL football or the first decent stint in the top grade and all of them have turned into above average NRL players.

So we’ll judge the 2008 class in a few years hopefully with a little more optimism on having unearthed a genuine superstar or two.
By W D Nicolson